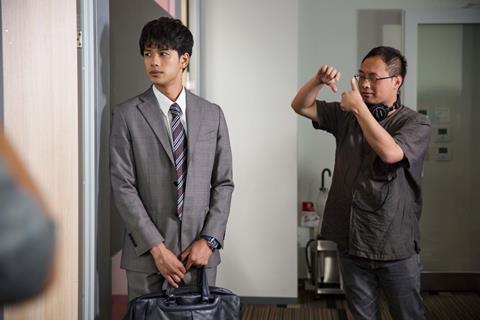 Koji Fukada on the set of The Real Thing

In 2016, a haunting Japanese film called Harmonium made a splash at Cannes Film Festival, winning the jury prize in the festival’s Un Certain Regard section. It introduced the world to Koji Fukada who, despite turning 40 only this year, had already been making films in Japan’s independent film scene for nearly 20 years.

Since Harmonium, Fukada has continued to explore the themes of duality and disconnection in titles such as A Girl Missing (2019) and The Real Thing (2020). Those three films, plus the rarely seen Human Comedy In Tokyo (2008) and several shorts will be screened by Tokyo International Film Festival (TIFF) in Japan Now’s Director in Focus sidebar — much to the director’s surprise. “I had always thought of [Director in Focus] as featuring directors with longer careers,” says Fukada. “I thought, ‘Is it really okay that it’s me?’”

Fukada may protest, but his career as a director spans nearly two decades: he helmed his first feature Chair(Isu) in his early 20s. It was a big leap for a young man who, just a few years earlier, had barely realised film directing was a job.

“I grew up watching and loving films,” says Fukada, whose childhood home was filled with VHS tapes. He was drawn to films from directors such as Eric Rohmer and Victor Erice, whose The Spirit Of The Beehive “made a huge impact”. But because the films he was watching were older and from outside Japan, Fukada didn’t realise he could be a director himself.

That all changed when, as a university student, he saw a flyer for The Film School of Tokyo, whose instructors have included lauded directors such as Kiyoshi Kurosawa. Enrolling at the school taught him the filmmaking basics — and, more importantly, brought the budding director into contact with like-minded peers. “I had watched films by myself up until then, so that was huge,” Fukada says.

Another turning point was Fukada’s encounter with Seinendan theatre company. “Like a lot of cinema fundamentalists, I hated theatre,” says Fukada. “But Seinendan was different. None of the actors emoted in loud voices, there was no music, no easy-to-understand plots. The lines sounded like normal conversation, but were written and performed so you could guess the characters’ internal feelings.”

Fukada joined the company and applied its quiet, naturalistic philosophy to his films. His self-produced Human Comedy In Tokyo starred members of the company and was screened at the theatre where the company usually performed.

“As a result, it’s a film not a lot of people have seen,” says Fukada. “So I wanted to take this opportunity to show it.”

For Fukada, the success of his Cannes prizewinner Harmonium comes down to its cast — it stars Kanji Furutachi and Mariko Tsutsui as a married couple whose banal existence is rocked by the appearance of a man (Tadanobu Asano) recently released from prison. “The film comes alive through that ensemble,” says Fukada.

Three years later, Fukada reunited with Tsutsui for A Girl Missing, in which she plays a home nurse who seeks revenge after her life is ruined by false accusations. It was the first time the ensemble-minded Fukada had focused on a single actor in a lead role. “The film is all about Tsutsui,” he says. “She is in every scene.”

The final feature film in TIFF’s line-up is The Real Thing — one of the titles selected for the Cannes 2020 Label — a nearly four-hour epic based on a manga from the early 2000s by Mochiru Hoshisato. “I read the manga when I was 20 and it really influenced me,” says Fukada. “When we were shooting, I felt a lot of connections between it and my previous films.”

Despite helming films at a clip of about one a year, Fukada has found time to involve himself in larger issues facing the industry. Early this year, he became one of the movers behind a crowdfunding project to help save Japan’s independent cinemas, or ‘mini-theatres’, from the effects of the pandemic.

“By February or March, it was clear from social media that mini-theatres were in trouble — customers were down by 50, 80, 90%. There were even days with no customers at all,” says Fukada.

The crowdfunding effort, dubbed ‘Mini-Theater Aid’, brought in more than $3m (¥330m), over three times its initial goal, and kept many independent cinemas afloat. “My films have always been shown in mini-theatres. If they went under, there would be no place for my films.”