The Oscar-winning director of The Artist talks about his latest film and shares his concerns that “there will be fewer movies than there used to be”. 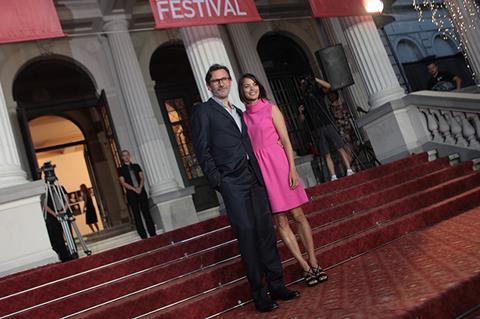 Is it your first time in Sarajevo? Can you share your experience here?

Yes! Of course! We came here thanks to Danis Tanović whom I had already met a couple of times. We really love the city and all the people we have met here. You can feel there are so many stories everywhere; everybody has a story. I mean, it’s very intense and you really can feel it. And the city… You can see the marks of the war everywhere and even on the faces of the people. Also, the history of this festival that started during the war makes it even more special.

What does the Oscar mean for your career? How has it shaped and changed it?

It changed some things for the career. It helped us (the co-producer of The Artist and me) to find money. With The Artist, we started with a movie that nobody wanted to finance and we ended up with five Oscars. It was so unbelievable. It was very difficult to say no to us after that. For the rest, my life… I don’t know yet, we’ll see… But basically, it changed the image that people have of me. Before The Artist, I was a director of comedies and when I did The Artist, it was like ‘Oh! A strange movie!’ and then the Oscar came. A lot of people suddenly knew me and my image had changed, but not me.

What prompted you to tackle the subject of the conflict in Chechnya in your new film and to take a remake of sorts of the 1948 The Search by Fred Zinnemann as its backdrop?

I was very touched by the story of the Chechnyan people; how their story had not been told and how people in France and the USA had the idea that behind every Chechen is a terrorist. That’s what a lot people think because of the Russian propaganda. So, I wanted to do something and I thought it would be useful and great to make a movie about this conflict but I didn’t have the key: how to make that; how to represent that; how to tell that very specific story. And, it was before The Artist.

I had seen the original The Search, and Fred Zinnemann had a very emotional approach. The movie was, in my opinion, a little bit melodramatic but I thought that the cinematic gesture for someone from Hollywood to show interest in a Czech kid was very noble. I therefore put this in relation with Chechnya and I thought there was a movie to make. But, it was an undoable film because it was impossible to find €20m to make a movie about Chechnya. Except that then The Artist came, the Oscar came and we could find the money. Then was really the right moment to make that film.

How difficult was it to deal with such an intricate subject? Was it conceived as a political message?

It’s not conceived to tell anything specific. It’s not a thesis but of course it’s political! You can’t talk about Chechnya and the war there without being aware that you are doing politics. And, the simple message would be that those who win the war have the privilege to tell the story and to make history. So, when the good ones win the war there’s no problem but when the good ones lose the war, history is a lie.

Therefore, I wanted to tell the story but I am not saying who the good ones are and who the bad ones are but at least I am saying that the Chechnyan people are people. It was very difficult for me to accept that it would have been easier if I were Chechnyan in a way because I would have had the legitimacy to tell that story. It’s not my story, it’s not my conflict and there was a chance to be ridiculous. That was the main issue for me.

It is said now that film is in danger. Therefore, what is your opinion on the current health of the film industry?

A lot of things have changed because of the digital revolution. And when I say revolution, it’s really a huge revolution, maybe more important than the invention of the print, because it’s not concrete anymore. Before, in the olden days, 20 years ago, you needed a copy to watch a movie, you had to have reels, tape and you needed something concrete. Now, you don’t need it anymore. That means that everybody in the whole world can instantly see a movie. And, that means that it’s almost free and when it’s free, that means there’s no more value and if there’s no value, there is no money to make more money.

The issue is that it’s very expensive to make a film because you need a lot of people and a lot of time. We will, therefore, have to find a balance in the way we screen films. By the way, we say film but it’s not film anymore. I mean, there’s no film in all the process anymore. I shot all my movies in film. I am sure that the market will find a balance but I am afraid that there would be fewer movies than there used to be.

There is this ongoing debate on film vs. digital. Which one do you subscribe to?

I have nothing against digital. Digital is winning now but maybe we are not obliged to kill film. Maybe we could have both. That would be my wish.

Do you have any particular passion project that you are trying to get made?

Yes, I have some things in mind. I hope that the next one will be lighter than The Search. I love comedies and I think comedy is a very noble genre. There’s nothing like making people laugh and bringing joy. Bringing happiness is very precious and priceless so I would love to make another comedy. I have other movies, very difficult to make or almost undoable. If there is another miracle and if The Search doesn’t lose money, I could perhaps do one of these.

And, what are your next projects?

My next project is a comedy that I will do in the US with a very smart script.

Is it one of those passion projects?

No, this one is a script that Will Ferrell’s production company sent to me and I think it’s really, really good. I truly want to do it and work with some very good American actors. It’s very exciting to do but it’s not something I have had in mind by myself; it’s something that someone has sent to me. But, I love it!