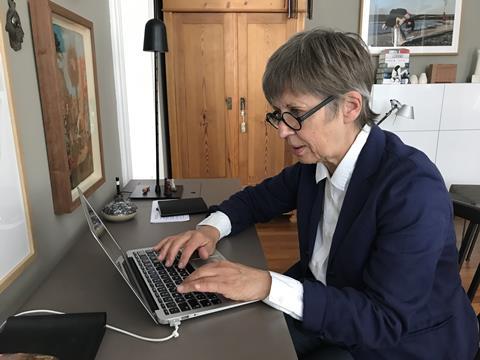 A former journalist, Döring has been the Academy’s director since 1996. Currently forward-planning the European Film Awards ceremony – which she has produced since 2004 and is due to be held in Reykjavik in December – Döring recently announced her plans to retire at the end of this year. Current EFM director Matthijs Wouter Knol has been announced as her successor and will take up the EFA director’s role on January 1, 2021.

Do you have a daily routine you try to maintain?
My daily routine turned out to be determined by video conferences which bring a kind of structure to the day. A day doesn’t go by without these online meetings which can be exhausting but do have the great effect that you feel connected, both internally and externally. It’s also important to keep your feet on the real ground and therefore to me, daily walks are extremely helpful. Luckily the restrictions in Berlin did not result in a complete lockdown, and now even shops and restaurants are opening again.

In what ways are you and your colleagues keeping up team morale?
Exceptional circumstances like these can also bring moments of truth: how strong and reliable are the bonds in a team when it is not working together spatially over a long period? What we at EFA are experiencing right now is that we are a team more than ever before. We enjoy our regular online meetings, we can witness that in our smiling faces and hear it from the little stories of our present daily life we are exchanging. Maybe most importantly, it is noticed if one of us doesn’t feel well.

What EFA activities have you been able to continue during lockdown?
The first activity was the EFA Young Audience Award on April 26 which in a very short time had to be transformed into an online event. We were extremely lucky our partners in 32 countries and the rights-holders for the three nominated films were ready to go on this virtual journey with us.

We started a campaign where EFA members recommend films from former European Film Awards editions – an initiative that has been very well-received. We stay connected with our members and partners across Europe, such as the Film Academies Network of Europe with whom we now have regular online meetings. And, right now, we are preparing our next board meeting – two days with a packed agenda that will have to be organised online for the first time in the history of EFA.

As a key institution for the European film industry, what is the key guidance you are offering to people?
To respond to a situation where filmmakers and rights holders have been overrun by the lockdown with regard to the calendar and nature of their film premieres and releases, we have adapted the 2020 European Film Awards regulations to allow a maximum of flexibility.

The big challenge is still to come in the aftermath of corona, when we will have to join all our forces and may have to jump over many own shadows if we want to adapt established systems to sustainable models for the future. The EFA members come from all areas of filmmaking, all of which are undergoing very different threats – our role will be to connect with the different areas and, where necessary, to mediate.

What’s your best piece of advice for home working?
Work hard but don’t forget to protect your private life.

What have you been watching, reading or listening to during this time?
The news, the news and the news – maybe too much of the news and certainly not enough of what I would like to watch and read and listen to in more contemplative times. I am always hearing with some envy from people who rearranged their bookshelves, or planted their gardens, or discovered their cooking or other talents – none of this has happened to me, so far. We have a job to do and, particularly with the constant adjustments and reinventions due to the crisis, this leaves me no time.

What advice would you give to people in the business who are worried about the future?
In moments of worry, we should remember that we are not alone and that we, as individuals and as members of the film industry, are not the only ones who face hard times. This pandemic is a global experience of all individuals and societies. I try to be optimistic in the sense that, although we may for sure lose something, we may also gain something.

What are your thoughts about the European Film Awards this year, which are due to be held in Iceland?
We are optimistic about that and so are our partners in Iceland where, according to the latest reports, the situation will allow tourism to start again in mid-June and where also bigger events are planned to take place in autumn. This gives us realistic hope to be able to hold the 33rd European Film Awards ceremony in Reykjavik as a physical event on December 12, 2020.

We believe that bringing the European film industry together after the lockdown will be extremely important, not only to celebrate the best of European cinema but also to communicate and to see together how after the crisis we will be able to resurrect and to shape the future.

Are you drawing up contingency plans for not being able to hold a physical event?
It is our duty to be prepared for all possible situations because one thing is obvious: the European Film Awards have to take place!

What do you feel is the current mood of the industry?
There is obviously a lot of insecurity but, at the same time, there is a will not only to survive but also a hope to embark on new shores. Our industry is based on creativity and there are strong European networks that over the past three decades have helped to make cooperation and solidarity a real experience. We can build on that.

What positive change might this bring to the industry?
It might accelerate certain developments which were already in the air but slowed down due to a certain inertia resulting from a system and privileges that may have given us comfort for a long time but now need to be scrutinised if we want to be ready for the future. There is a huge potential in it which we should not leave to others.

What is the first thing you will do when the lockdown is lifted?
Travel to Iceland to continue our preparations. Right now we are communicating a lot online. However, if you want to be creative and together develop a ceremony that has something to tell, especially at times like these, then social life should not be underestimated. So we are waiting to meet again our Icelandic partners and friends in one of these nice restaurants Reykjavik has to offer and to eat and to toast to life and to European cinema together. And then, back in Berlin: watch a film in one of the city’s great cinemas!

When did you decide it was time to hand over the EFA reins?
I’ve been thinking about it for some years already as I saw the age of retirement coming closer. For my succession we published an open call in February and we received a wide range of applications from very good and qualified candidates. Matthijs is the ideal person to take over and lead EFA into the future. He brings a profound knowledge of and strong enthusiasm for the film art and industry, combined with an understanding of the needs of the people who work in cinema and an openness to what the future may bring. I am very content leaving EFA under his directorship.

Will the EFAs in December be slightly bittersweet as your last big event as director?
Of course, it will be bittersweet and very emotional. But it will also be a happy moment because I’ve been extremely privileged with my 33 years with EFA, from its very first steps to where it is right now. I couldn’t have imagined a better job in better company, be it Wim Wenders, our great president with whom I’ve gone through thick and thin, the board with chairpersons one can only dream of working with – Nik Powell, Humbert Balsan, Yves Marmion, Agnieszka Holland and now Mike Downey – my wonderful colleagues, the EFA members and all the partners, patrons and friends of EFA.