'Noma: My Perfect Storm': filming in the world's best restaurant 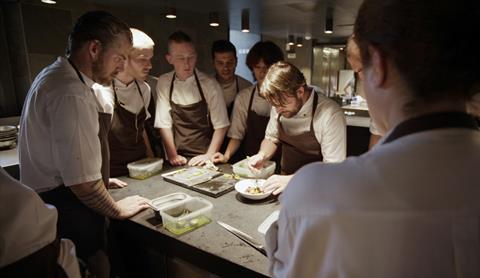 Now entering its fifth year, the San Sebastian Film Festival’s ‘Culinary Zinema: Film and gastronomy’ strand – a collaboration between San Sebastian, the Berlinale and the Basque Culinary Center – celebrates the best in cinema dedicated to the art of food.

The titles in this year’s programme include studies of El Celler de Can Roca and Mugaritz, respectively the first and sixth best restaurants in the world, according to the revered annual poll conducted by British magazine Restaurant.

Currently residing at third on the same cannon, Copenhagen’s Noma was previously crowned at the top of the list four times between 2010 and 2014, before it suffered a drastic fall from grace in February 2013 when 63 diners were taken ill after a kitchen employee was contaminated with a strand of the norovirus. One of San Sebastian’s Culinary Zinema films this year – Noma: My Perfect Storm – tells the story of the ground-breaking restaurant, which serves everything from ants to fermented cricket and live shrimp, and its enigmatic head chef René Redzepi.

The origins of the film stem from 2007 when Director Pierre Deschamps was invited to Noma to shoot a 15-minute short documentary. After completing that project, he decided the potential existed to shoot a feature: “[René] gave me his book there, and that was the beginning of it. It isn’t a film about Noma, it’s really a film about Rene Redzepi. He is in the foreground with Noma as the backdrop.

“The idea was to try to go into his mind, to understand what was going on in the mind of the guy who revolutionised the gastronomic world. It’s the story of a guy who comes from a normal background who rapidly climbs the ladder to success.”

Redzepi founded Noma in 2003 alongside entrepreneur and fellow chef Claus Meyer with the intention of redefining the cuisine of Scandinavia and the Nordic region. In 2008 the restaurant was awarded two Michelin stars (from a possible three; they are still waiting for the third) by the hallowed Michelin Guide, and in 2010, just seven years after opening its doors, Restaurant magazine crowned the establishment the best in the world for the first time.

Redzepi admits that the recognition is something he enjoys, but he says that his priorities have changed over the years: “When you wake up and the first thing you do is change a diaper, and then go to work with your team, you really don’t think about it much. If there’s anything, I’m happy that it gives us opportunity to progress.”

And while they have progressed significantly in a relatively short space of time, arguably to the pinnacle of their craft, Redzepi believes that they have room to continue improving: “I feel we’re very good at what we do and that we have moments when it’s exceptional, but I know we can be so much better.

“We’re just kids basically. We’re finding our way. We haven’t settled in on what we’re doing completely – we’re still testing. What makes sense? What does it mean to cook in this region?”

Noma shot to fame by crafting modern cuisine exclusively from ingredients indigenous to the Nordic region. While their approach was not taken seriously at first – with Rene recalling one outspoken critic branding them “seal fuckers” – eventually their creativity and originality became too prominent to ignore.

But despite this prominence, getting the film made wasn’t always an easy ride for Deschamps: “We proposed the project to Danish Film Institute and they were not interested – I think the narrative structure wasn’t developed enough.

“I think people would like documentaries to be prewritten but it doesn’t happen like that – there’s always something happening. You can’t write something for certain, you have an idea in mind, but you can’t give them a finished answer.”

Eventually, with the help of a Danish company who provided free cameras and lenses, and using their own private finance, the project got underway. However, further down the line funds began to run low, so Deschamps and his partners followed the increasingly common step of turning to an online crowdfunding source.

Between May and June this year they managed to raise $23,000 on Indiegogo. Though this fell short of their desired target, Deschamps still found it a positive experience: “I didn’t know what I was doing with it, but I could feel there was the possibility to connect with a potential audience. Suddenly we were all connected and part of the same adventure. I really like that.”

Capturing the qualities of Noma on film, however, was not straightforward. “It doesn’t matter how many Instagram pictures you’re swallowing of the meal here, or how many articles you read,” says Redzepi, “getting the vibe of the whole team working together, you have to be there, to put it in your mouth and taste it. For that reason, you can’t have a movie acting as a dining experience.”

Deschamps decided to focus the film on the character of Redzepi himself, an enigmatic and occasionally fiery individual. Indeed, at several moments in the film he can be seen bemoaning mistakes and losing his temper with his staff.

“This is not a film about a chef at the stove entertaining the audiences while making dishes,” says Deschamps. “When you shoot for such a long period of times you do have moments… joy and sadness. The film is balanced with these ups and downs.”

For Redzepi, he feels these experiences can be tough to look back on: “There are some moments in the film where I am very angry – moments where I feel my whole restaurant is disappearing under my feet. That part of it is not something I thrive on, not something I want in my kitchen.”

However, Noma has recovered, returning to the top three on Restaurant magazine’s greatest restaurants list this year, and it continues to be fully-booked many months in advance.

And the future looks bright for Redzepi and Noma: following a successful temporary relocation to Japan earlier this year, and another planned to Australia for 2016, it was recently announced that Noma would undergo a reinvention: the restaurant will be closed at the end of 2016 and transformed into an ‘urban farm’ where they will cultivate their own livestock and produce; it will reopen in 2017 with an entirely new menu on new premises.

Noma: My Perfect Storm documents and celebrates Redzepi and his team as they continue to make waves in the world of haute cuisine. TrustNordisk are selling the film internationally, and have closed delas in Germany and Austria (NFP), Korea (Atnine Film Co. Ltd.), Benelux (September Film Rights) and Japan (Longride). The film screens at San Sebastian on September 22.