Oscars 2018 predictions: Who will win/should win according to Screen staff

Screen staff reveal their final Oscar predictions, as well as who should win each of the major awards. 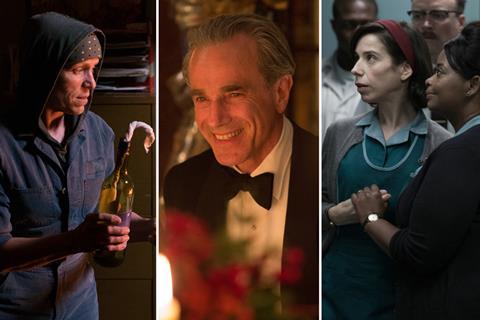 Matt Mueller, editor
Will win: Get Out. Last year I said La La Land had unstoppable momentum and look where that ended – I was right for approximately 45 seconds. This year, I’m going for the big upset, Get Out to pip front-runner The Shape Of Water at the post.
Should win: Call Me By Your Name. Hasn’t got a chance (uh oh, famous last words) but for me it’s the most emotive and perfectly realised film amongst this year’s strong list of Best Picture nominees.

Fionnuala Halligan, chief critic and reviews editor
Will win: The Shape Of Water. It delivers to every voter in the Academy, no matter what their discipline: it’s a superb all-round package and, ergo, the Best Picture.
Should win: Dunkirk. I have a very soft spot for Dunkirk too, but that picture’s chances seem to have faded away.

Charles Gant, features editor
Will win: Three Billboards Outside Ebbing, Missouri. The last time a film won Best Picture without netting a nomination for direction was five years ago with Argo, but if voters wish to split their two big votes between Martin McDonagh’s film and Guillermo del Toro’s The Shape Of Water, the ballot is certainly telling them how to do it.
Should win: Lady Bird. There are seven nominated films I’d be genuinely happy to nab the category, but a win for Gerwig’s perfectly poised coming-of-age tale would be a particular delight.

Tim Grierson, senior US critic
Will win: The Shape Of Water. There’s a compelling case to be made for Get Out and Three Billboards, but in a very tight Oscar race, I think Guillermo del Toro’s celebration of love among the marginalized and misfits will check enough boxes with Academy members to pull out the victory.
Should win: Dunkirk. Christopher Nolan’s stirring, wizardly reimagining of the World War II film was an extraordinary reminder of the power of the big-screen experience.

Matt Mueller
Will win: Guillermo del Toro.
Should win: Luca Guadagnino should be on the shortlist for Call Me By Your Name, but it would be fitting for del Toro to receive his due as one of the most outstanding and original filmmakers of his generation, and complete a Mexican filmmakers’ Oscar hat-trick alongside buddies Alfonso Cuarón and Alejandro González Iñárritu.

Fionnuala Halligan
Will win: Guillermo del Toro.
Should win: Guillermo or Christopher Nolan; they’re both inspirational, brilliant, and in total command of the big screen. It seems impossible that neither has won so far.

Tim Grierson
Will win: Guillermo del Toro. The master of monsters has crafted his most emotional, romantic fantasy. It’s an impressive technical feat with a lot of old-school Hollywood charm as well. The Academy will honor his achievement, even if voters decide to go another way with Best Picture
Should win: Christopher Nolan. Tinkering with time frames while delivering a jarring sensory experience, Nolan made the horrors of war feel frighteningly new. At the same time, Dunkirk is one of his most rousing achievements, locating the many solitary, anonymous acts of heroism that litter any battlefield.

Fionnuala Halligan
Will win: Gary Oldman.
Should win: Timothée Chalamet. Nothing against Gary Oldman, but I feel exhausted by Churchill this year; there should be a Best Churchill award.

Charles Gant
Will win: Gary Oldman. The outcome isn’t perhaps as certain as it was at Bafta, but any winner other than Oldman would nevertheless constitute a major upset.
Should win: Timothée Chalamet. At 22, Chalamet is the youngest best actor Oscar nominee in 78 years, and many will argue that a win would be premature, but the subtle humanity of the performance wins me over to Team Timothée.

Tim Grierson
Will win: Gary Oldman. The veteran’s strutting transformation as Winston Churchill is just the sort of showy performance that Oscar loves.
Should win: Timothée Chalamet. The exceptionally poised young actor — he only recently turned 22 — captured all the confusion and joy of first love, a far subtler achievement than Oldman’s swaggering turn.

Matt Mueller
Will win: Frances McDormand. The Bafta win surely clinched it for McDormand, given Sally Hawkins wasn’t able to capitalise on UK home-field advantage. Hard to see Hawkins doing it at the Oscars given McDormand’s already heaving trophy cabinet.
Should win: Meryl Streep for The Post. Kidding! Everyone loves Meryl but the automatic nomination needs to stop. My favourite female performance of the year was, hands down, Margot Robbie’s in I, Tonya. Smart (even though the character herself wasn’t terribly bright), funny, vulnerable, perceptive, bolshie – never a dull moment when she’s on screen.

Fionnuala Halligan
Will win: Frances McDormand.
Should win: Sally Hawkins, or Margot Robbie, who is a rank outsider but gave a knock-out performance that brought her this far – why not all the way?

Charles Gant
Will win: Frances McDormand. Like Oldman, she’s won all the big prizes in the march to Oscar, and any other result would be a big surprise.
Should win: Frances McDormand. Both Sally Hawkins and Saoirse Ronan captured my heart, but McDormand is flat-out brilliant in the role, and she’s the feisty magic ingredient that helped connect a film about a grieving mother flattened by a horrific crime with a broad audience.

Tim Grierson
Will win: Frances McDormand. It’s a tough, gritty performance from an actress the Academy adores. (This will be her second Best Actress prize, winning 21 years ago for Fargo.) Plus, she’ll probably give one of the best speeches of the night.
Should win: Margot Robbie. Bringing humanity and vulnerability to Tonya Harding, Robbie does a superb job showing how a driven, troubled young woman was the ultimate underdog. This is remarkably nuanced work that’s ultimately deeply compassionate.

Matt Mueller
Will win: Faces Places. Agnes Varda received her honorary Oscar in November at the Governor’s Ball, and Oscar voters will want to add the cherry on top and continue showing their admiration for this extraordinary filmmaker.
Should win: Faces Places, for those same reasons.

Jeremy Kay
Will win: Icarus. Bryan Fogel’s film stands out among a typically exceptional documentary field because it’s unique, and a game-changer.
Should win: Icarus.

Charles Gant
Will win: Icarus. In a year absent a clear front runner, Bryan Fogel’s exposé of Russia’s state-level sports doping strategy should achieve the widest resonance.
Should win: Strong Island. Yance Ford’s investigation into the violent death of his brother and the legal process that exonerated his killer turns quiet anger into a powerful indictment of the US judicial system.

Tim Grierson
Will win: Faces Places. Icarus could win thanks to its depiction of Russian corruption — a grim reality on the mind of many Oscar voters after that country’s meddling in the 2016 US election. But the bittersweet, life-affirming Faces Places might resonate louder, especially with older Academy members who will respond to its depiction of aging and mortality.
Should win: Last Men In Aleppo. There have been several fine documentaries in the last few years about the atrocities in Syria, but Last Men In Aleppo is the most sobering, articulating not just the enormity of the crisis but also the ways in which it’s profoundly affecting those on the ground trying to make a difference.

Matt Mueller
Will win: A Fantastic Woman, as the most accessible of the five nominated films. But new rules opening this up to more European voters via streaming links could also present The Square and On Body And Soul with a path to victory.
Should win: A Fantastic Woman. For what it would represent, I’d like to see Sebastián Lelio’s transgender drama take the prize. But Andrey Zvyagintsev’s devastating Loveless would also be a very worthy winner.

Fionnuala Halligan
Will win: Loveless, and it’s magnificent.
Should win: BPM, which didn’t even make the shortlist.

Charles Gant
Will win: A Fantastic Woman. With this category now open to all voters, the particular taste of the foreign language chapter no longer holds such sway. This wider voting pool may find Loveless a tough watch, and The Square isn’t cumulatively as strong as its many brilliantly memorable scenes. That gives Sebastián Lelio’s film the chance to sneak through the middle.
Should win: A Fantastic Woman. So often, showy directorial flourish can impede the vital human connection between character and audience. Lelio’s bravura filmmaking is always in the service of intimacy.

Tim Grierson
Will win: A Fantastic Woman. This touching film about a transgender woman grieving for her dead lover has just the right amount of sentiment to move Academy members. Plus, director Sebastián Lelio’s Hollywood profile continues to rise. (He just completed Disobedience, with Rachel Weisz and Rachel McAdams, and he’s next remaking his Gloria with Julianne Moore.)