The director discusses his India-US drama, which premired at Locarno in August. 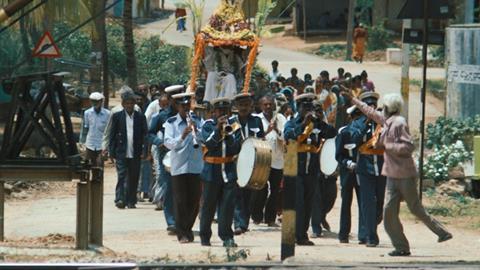 Raam Reddy, a 25-year-old Bangalore-born filmmaker who attended Prague Film School, tells Jeremy Kay about his intimate epic Thithi, an India-US drama which takes place in a small village in southern India in the wake of significant news and first premiered at the Locarno Film Festival in August. The film is available for US distribution.

Jeremy Kay: Tell us what the film is about.

Raam Reddy: Thithi is a dramatic comedy about how three generations of sons react to the death of the oldest in their clan, a man named Century Gowda: a locally renowned, curmudgeonly 101-year-old man.

What does the title mean?

‘Thithi’ is a Kannada word that refers to the final funeral celebration​, 11 days after a death.

Is any of this based on personal experience?

Many of the larger narrative elements -​ such as the comparative characterisation of the three generations and the underlying philosophy beneath the whimsical nature of the story​ -​ are reflections of my own life and observations. At the same time, importantly, the co-writer of the film, Eregowda, was born and raised in the same village where the film was shot. This led to the film containing an insider’s authenticity, born from countless personal experiences​ during his childhood.

There are several well-defined characters in the film. Did it take many rewrites to get that balance right?

My co-writer and I have known each other for 15 years. We have very complementary creative minds that allowed us to easily collaborate. His familiarity with the people of the area coupled with my understanding of classical screenwriting led to the first draft of the script being completed in less than two months. A few revisions followed, but the changes were minor.

Land ownership rears its head. Is this an inflammatory topic in India?

India has a high population density; there are lots of people, and not that much land. With greed being one of the keystones of the human condition, grabbing as much land as possible – whenever possible, no matter what it takes​ – tends to become a pursuit for the middle-aged. ​

Are the actors non-professionals?

All the actors in the film are farmers who never dreamt of being in a film.

When and where did you shoot?

Shooting ​began in January 2014. The entire film was shot on location in South India, in and around a village called Nodekoppalu in the Mandya District of Karnataka.

How did you get funding for the film?

The film was realised through the support of a Bangalore-based production house called Prspctvs Productions, and Maxmedia from Los Angeles.

The tone feels very un-Bollywood. Who are your influences in film?

My creative sensibilities were shaped by films from all over the world, especially cinema from Eastern Europe, Iran and Turkey. For this particular film, there were many different influences, including films like The Band’s Visit​ and​ the American television show The Wire, amongst others.