“People wanted a pure hero film”: Sharunas Bartas on his drama ‘In The Dusk’ 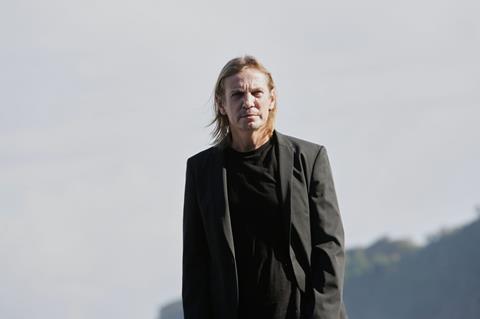 Lithuanian director Sharunas Bartas broke onto the international festival scene in the early 1990s with shorts and features capturing the mood of his country and the wider Baltic region as it transitioned from Soviet occupation to the re-establishment of independence.

As the Baltic state celebrates the 30th anniversary of this independence, Bartas has gone back in time for his first-ever historical drama In The Dusk, which made its international premiere in competition at the San Sebastian International Film Festival this week.

Set in 1948, it captures the complex reality of the early years of the Soviet occupation of Lithuania immediately after World War Two and the struggle of its doomed partisans, through the eyes of a young resistance fighter determined to do his bit for the country’s future and an old peasant farmer stuck in the past, played by veteran actor Arvydas Dapsys.

Bartas mulled making a film about this decade-long period in Lithuanian history for more than 15 years.

“I was hesitant about taking it on. It’s a complex project, not just the story but also from a production point of view to rebuild the atmosphere of these times,” he explained.

Prior to World War Two, Lithuania enjoyed two decades of independence but this freedom was short-lived. An estimated 30,000 Lithuanians died in the struggle to drive Soviet forces out of the country from 1944 onwards. Living in rudimentary camps in the forests and countryside, the partisans initially had the upper hand but were steadily crushed over the course of a decade.

“At first, the Soviet army was weaker. It had just come out of the war. It didn’t know this new country where everything was different, from the language to its religion. They had to find collaborators, investigate the terrain. But with time, they set up the infrastructure they needed to occupy,” explained Bartas.

“The film is set in 1948, 49 when the partisans had been camping out in the forest for nearly three years in very difficult conditions with no help apart from the local people. They’re exhausted.”

In The Dusk homes in on the miserable conditions of the partisans and Lithuania’s rural population at large and also tackles the role informants played in breaking the movement. This approach prompted some criticism in Lithuania when the film was released there in the spring.

“I think people wanted a pure hero film,” says Bartas. “I didn’t have a political agenda. It was a very critical moment in people’s lives. It’s a time when people open themselves, show they are bastards. There had been a war. There was hunger, homelessness. Parts of Lithuania were bombed and people had nowhere to live. People started to become like animals, fighting for food like dogs for a bone. Nothing was normal.”

Bartas sees this period as part of a longer historic pattern for the Baltic state, which lies between Latvia, Belarus, and the Russian outpost of Kaliningrad.

“Lithuania is not like Britain, which is an island. Lithuania is always on the road. It’s at the point where the Russian empire connects with the West. It’s a small, flat country which is easy to cross, and take,” he explained.

As well as partisan diaries and historical archives, Bartas drew heavily on the stories he had heard from his great-grandparents, grandparents, and parents for the screenplay, co-written with Ausra Giedraityte.

“I was surrounded by these stories about the war and after the war and then lived through the transformation, or destruction of the Soviet Union myself. I’ve lived with this information all my life,” he said.

The characters, events, and locations in the film are composites, however, rather than depictions of real-life figures or events of the time. One of the most complex aspects of the production was recreating the look of Lithuania in the late 1940s.

“Fragments of that time still exist but even with the old buildings something’s always changed, whether it’s a different type of roof or the addition of a garage. Even the sheep have changed. They farm a different breed now,” said Bartas, noting the production managed to find authentic livestock through a specialist breeder.