Perspectives on 2020: Ita O’Brien on the new challenges for intimacy co-ordinators

Reduced crew numbers on set to allow for social distancing has been a challenge for intimacy co-ordinators. As part of Screen’s Perspectives on 2020 series, Intimacy on Set founder Ita O’Brien tells us why respecting on-screen intimacy is more important than ever. 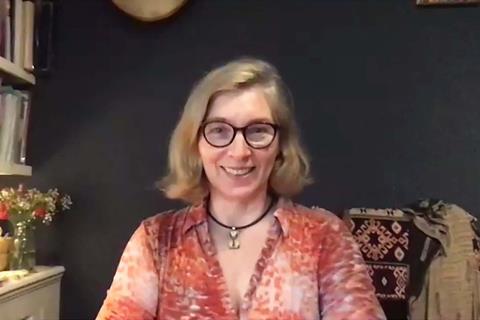 The UK’s Ita O’Brien has become one of the industry’s most in-demand intimacy co-ordinators, with credits that include Normal People, I May Destroy You, The Dig and Ridley Scott’s The Last Duel. She has spent six years developing best practices around scenes of intimacy, sexual content and nudity on stage and screen through her company Intimacy on Set, but it has been the rise of the #MeToo movement that has propelled her work into the spotlight. O’Brien is now working on Reed Morano’s adaptation of Naomi Alderman’s novel The Power and Sarah Adina Smith’s Birds Of Paradise, both for Amazon Studios.

What is your standout memory of 2020?
The thrill of two of the major productions I was involved with, Normal People and I May Destroy You, hitting the zeitgeist and being so understood. Five years ago, the idea that these were ‘women stories’ would have alinated half of the world’s population. But they have taken off around the globe and not been labelled as specifically ‘women’s stories’, even though they are written by women and told from the perspective of women.

You work very closely with actors and their bodies. How have you had to adapt your process during the coronavirus pandemic?
When there was the complete lockdown and all of the productions were stopping, it was an ‘Oh my God’ moment. Then I got Covid-19 myself, and I was ill for a month. After that, from around April through to June, I was sat at my desk for hours on admin and Zoom calls. I was really missing feeling the presence of my whole body. At one point I was nothing but buttocks and brain!

When I run my Zoom sessions [for actors and filmmakers], I always make people stand up on their feet and connect with their bodies, listen to their bodies. For five minutes we shake it out, wake up our bodies, and that makes such a difference, even on the computer. Everyone always appreciates that time.

And how are you working on set?
I’ve been back on productions since mid-June. The first production I worked on they were testing three times a week, and then the next one were were bubbled in a beautiful hotel with 52 acres of land. So I knew that I could relax, as the protocols were in place, and just carry on with work as normal.

One of the things I have always done in my training is neutral mask work, where someone wears a complete mask which means you suddenly have to look to your whole body to communicate. But being on set with the masks and plastic visors has been challenging. You have to work extra hard to communicate with the crew. You’re trying to glean everything from this tiny space around your eyes.

Are you finding actors are less comfortable with getting close during a scene?
There is an added anxiety due to all the additional protocols that are in place. And if someone is concerned about anything, even their own health, then, as an intimacy coordinator, I can help to facilitate an open conversation. Part of the consent process is always to agree on the shape of the scene, and on the body parts that will be touching. But the icebreaker is a hug. I remember going onto one production, where we were filming the most beautiful love scene, and watching that hug, and every cell in my body was responding. The actors said they really enjoyed having that close, intimate contact.

Intimacy co-ordination has come into the spotlight. Do many filmmakers still need convincing about the need of what you do?
Filmmakers really want to know about the work. My intention is to empower everyone, to provide a professional structure. Never to assume, “Okay, it’s just a kiss, get on and do it.” You have to make sure it’s serving the storytelling and is done in the right way. I want to give everyone the information so they can integrate it into their practices.

I’m also training people as intimacy co-ordinators. That’s been challenging because I had a group of people across the globe who were on the training pathway, and were ready to be mentored, and we couldn’t make it happen [due to social-distancing requirements]. People don’t want extra bodies on set. That’s been upsetting, but I’ve spent the time codifying and writing the training.

How can the industry ensure more inclusion in 2021?
As white people, we have simply had to acknowledge that we have an inherent privilege. And The industry now knows it has to do better, thanks to movements like Black Lives Matter. I’ve had the joy and privilege of being able to support the work of diverse creatives like Michaela Coel, and I’ve just finished working [on a project] with Noel Clarke. He doesn’t wait for things to come to him, he’s out there championing black stories. And within those productions, he makes sure there is diversity across all roles. That’s what needs to happen. Diversity simply has to be present in all parts of the industry.

I’m also working on a production at the moment where the lead actress had a baby in April, and she’s breastfeeding on set. The only way there will be true equality with women in the industry is if every production provides childcare, so that women can be truly present and not have to take a step back if they choose to have children.