Perspectives on 2020: Nadine Labaki on how the Beirut explosion shaped her pandemic year

Lebanese writer, director and actress Nadine Labaki tells us how she had thrown herself into a sustainable living campaign during the pandemic, until the devastating explosion in Beirut of August 4 pushed her back into filmmaking 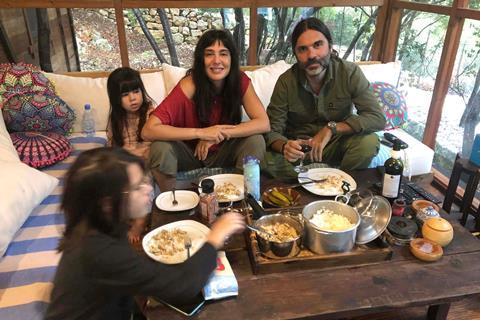 After two years ratcheting up air miles travelling the film festival and awards circuit with Capernaum, Lebanese filmmaker and actress Nadine Labaki has been grounded in Lebanon for much of 2020.

She was in the middle of launching a campaign to encourage more sustainable living when Beirut was devastated by the huge ammonium nitrate explosion of August 4. Since then, Labaki has been at the forefront of efforts to raise awareness of the challenges facing the city and Lebanon’s wider population.

In November, she launched an online short-film campaign called Keep Talking About Beirut that brings together a collage of powerful images capturing the immediate aftermath of the blast, which features a voice­over by actress Cate Blanchett and has since gone viral. At the same time, Labaki also appeared in front of the camera in Mounia Akl’s feature Costa Brava Lebanon. She co-stars opposite Palestinian actor Saleh Bakri, as a couple who escape Beirut and attempt to build a utopian existence in the mountains.

By coincidence, Labaki and her husband, the composer Khaled Mouzanar, are also exploring “a different way of living”, having moved temporarily to a “small cabin in the forest” where they are home-schooling their children and attempting to live a more sustainable life.

What is your most memorable moment of 2020?
August 4. It’s something we’ll never ever, ever forget. It was the most powerful non-nuclear explosion of the 21st century, like Hiroshima or Nagasaki had happened in Beirut. It’s not something you expect in our day and age. Lebanon was already going through the worst economic crisis in its history. Many people had already lost everything and half the population was living under the poverty line. The explosion came as a knockout for everyone.

Were you in Beirut at the time?
Fortunately, we got lucky. We were outside of Beirut at that time. Our house was heavily damaged. I don’t even dare to imagine what would have happened if we and the kids had been at home; I have a four-year-old daughter and an 11-year-old son. It was a very traumatic experience for everyone who was there.

I thought my kids were going to be spared from the memory of war. For me, it’s too late. I was born with the war in Lebanon and I grew up in the war in Lebanon. But all of a sudden, in just one second, a whole generation was again drowning in blood and experiencing the same sorts of feelings of frustration and injustice, related to war and those kinds of catastrophes, that previous generations had gone through at their age, and that was so difficult to accept.

Before August, how had you adapted your life to stay productive and sane during 2020?
In the beginning I enjoyed it a little because of living [through] something different and new. I’m sure a lot of people felt like that. Then I started to understand how difficult it was for people who need to earn a living day-to-day and that while we were surviving in our houses, other people were dying of hunger. I began asking myself, ‘How do I deal with this, how can I use my voice and my tool, which is cinema, in the right way?’ I came up with this campaign called ‘Plant Of My Heart’, encouraging people to grow vegetables on their balconies or any small lot of land near their homes that wasn’t being used.

We shot a video around one of the songs from my film Where Do We Go Now?, [titled] ’Hashishit Albe’, changing the words to encourage people to grow their own produce. You can see it on my Instagram account. It was my way of turning this confusion and frustration into something a bit more positive. It was very successful and then, all of a sudden, August 4 happened.

How did you cope after the blast?
For a long time, I didn’t know how to react. I was in such a state of shock and trauma. Then, a month after the blast, a pulse was detected under the rubble by a Chilean rescue team. In a way, the whole country woke up. Everybody was following that pulse, waiting to see if somebody was still alive. And I woke up too. I started filming everything.

Are you filming every day?
No, but when I can, I get out and film. I’m trying to grasp and grab whatever is happening, people working on the ground, NGOs, any event, any activity. I don’t know if something will happen with this footage, but I feel like we need to at least capture this time in our history and that’s what I’m doing now. At the moment, it’s still very difficult for me to understand, to take the right angle. I don’t have enough distance with what’s happened yet.

Tell us more about the ‘Keep Talking About Beirut’ campaign.
Our failing government, which put us in this situation, promised us the truth five days after the blast, and three months later there was nothing. It was very important for me to do this campaign so that people don’t forget about Beirut. People think it’s just another explosion in the Middle East, and it’s important to show how big and devastating it was. There were so many poignant and harrowing pictures capturing the horror of what happened. I contacted my friend Elie Fahed, who is also a filmmaker, and we started working on it, long distance. And then I wrote the text with Sara El-Yafi, who is a great political activist.

How did Cate Blanchett become involved?
Cate’s been involved in many social issues as a UN ambassador [Blanchett is a goodwill ambassador for UNHCR, the UN Refugee Agency]. She speaks a lot about struggles that are close to my heart, statelessness, the refugee problem. And I thought, ‘Why not?’ so I contacted UNHCR. [Labaki is also affiliated with the body under the status of ‘high profile supporter’.] I’ve met Cate many times on many occasions, and we have a nice relationship. She was on vacation, but she didn’t hesitate and was very involved.

What’s the one thing you’re pinning your hopes on for 2021?
I’m hoping the truth will come out for us to be able to rebuild ourselves and that we’ll get rid of our political class in Lebanon because it’s the only way we can move forward. There has been so much blood on their hands, it’s impossible to build a country with them still governing.

How can the entire industry support more inclusion behind and in front of the camera in 2021?
Everybody working in this industry has such a huge responsibility for this. I truly believe in the power of cinema, I truly believe in this tool and I truly believe that a film can change our perspectives on things, ignite a debate on a certain social issue or humanise a problem.

What excites you about the future of the film industry?
It goes back to what I was saying about the need for a cinema that better reflects reality, that is less about a make-believe kind of world. This fine line between reality and fiction really excites me. And I’d like to push it more in everything I will do next.

Looking at the wider challenges of the Covid-19 pandemic and its impact on cinema, it has changed audience habits in 2020. Do you think this will have a longer-term impact on cinema?
People miss this ritual. We all miss it so much. When Covid-19 is over, I think that cinemas are going to thrive again, because we’ve felt that void, this need to sit in this dark room and have a collective sort of experience, watching film. No platform can replace this feeling of sharing those moments and those vibes.