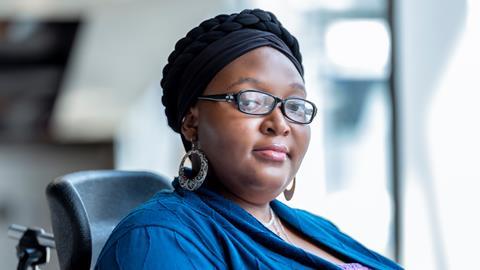 Matilda Ibini playfully describes herself as a “bionic playwright and screenwriter”. As the east London storyteller explains: “It’s a heads-up that I am disabled, but my work isn’t — it’s not solely for disabled people.”

That work includes Caring, a feature in development with BBC Films that grew from an idea she developed on a playwriting and screenwriting masters course at City, University of London back in 2014. It is a black comedy about a disabled woman who finally finds a good carer — only to discover the carer is a serial killer. Ibini is co-writing with Gabriel Bisset-Smith, who will direct. Dominic Buchanan (The End Of The F***ing World) is producing, with the goal to shoot next summer.

Two TV series are at early stages of development. Ibini describes the first as “a British-Nigerian fantasy” inspired by Yoruba heritage, which she is co-creating with her younger brother Samuel Ibini. It centres on a group of youths trying to save the spirit of their recently deceased friend from a vengeful deity. The second, with Raw TV, is a coming-of-age story about a romance between a disabled woman and her carer.

During lockdown, Ibini wrote an episode titled ‘The Unexpected Expert’ for BBC4’s Unprecedented series of isolation-originated stories, which launched online in May. Based on her own experience, it depicts a disabled woman fighting a system that is depriving her of the support she needs more than ever during the pandemic. She worked with director Debbie Hannan on the project, and the pair have also collaborated on Shielders, a digital play that premiered in September. Head Over Wheels, a short she wrote that Lisle Turner directed and Wrapt Films produced, will be released online in October.

Diversity on multiple levels is key to her ethos. “There are so many ways of telling stories, and I want to learn as many as possible,” she says.