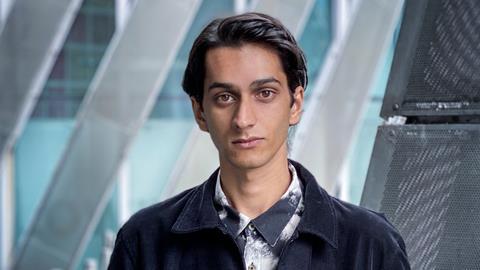 Manchester-based Naqqash Khalid’s first feature will be In Camera, developed as part of the latest iFeatures scheme and backed by BBC Films, the BFI and Creative England.

He describes it as “a fairytale about ambition, performance and identity” set in an imagined version of his home city, following an actor navigating an absurd version of the film and TV industry. Structured like a “concept album” and with scope for improvisation in the script, Khalid hopes to start shooting next spring. “It has been exciting to figure out what a film like this looks like on the page,” he says.

While studying English at the University of Salford, Khalid wrote his first play, which was performed at fringe venues in Manchester and London. As a PhD student, he filmed his first short, Parts, in New York in 2016. Made in 12 hours with a crew found on Craigs­list, it won a prize at Manchester’s Grimmfest. His next short, 2018’s Stock, was funded as part of Sky Arts’ Art 50 project, which featured artists responding to post-Brexit Britain. The film proved stressful after the lead actor’s visa ran out midway through the shoot. “It was very appropriate for a Brexit-themed project,” says Khalid.

Stock, which was shown on Sky Arts in April 2019, helped earn Khalid a place on the iFeatures scheme, and also secured him a meeting with Sky director of drama Cameron Roach. Khalid pitched a loose, four-part adaptation of Boris Vian’s French play The Empire Builders (Les Batisseurs d’Empire). “[It is] an absurd dark comedy about a family who are being persecuted for an unknown reason and are forced into a tower block,” said Khalid. “Every time they hear this terrifying noise, the whole floor moves up one floor, and every time they do, the space gets smaller and smaller.”

Since delivering the pilot earlier this year, he has been writing episode two during lockdown. “It’s about a family forced into self-isolation,” says Khalid with a laugh. “I have been developing it for a year but a lot of people think it’s responding to the now.”