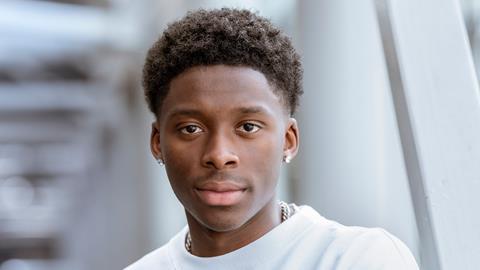 As a screen debut, taking the lead in a Steve McQueen film might have proved daunting for some actors. But London-born Sheyi Cole knew he was ideal for the part, if he could just get an audition.

“I was in my first year of drama school and I had just come out of a lesson when I heard there was this amazing role up for grabs,” recalls Cole, now set to enter his third year at London’s Guildhall School of Music & Drama. “I said to my agent, ‘This is Steve McQueen so do whatever you have to do to get me in there, please, and I promise you won’t regret it.’”

Cole beat thousands of hopefuls for the eponymous role in Alex Wheatle, part of McQueen’s ‘Small Axe’ anthology series, centred around London’s West Indian community from the late 1960s to the early 1980s. It is set to debut on BBC One in the UK and Amazon Prime Video later this year. “Steve took me under his wing, teaching me about things like the architecture of scenes,” says Cole. “He opened my mind to so much.”

The actor’s background has been theatre-based, attending the Brit School in 2016 and being part of the National Youth Theatre, Arcola Youth Theatre, the Royal Academy of Dramatic Art’s youth theatre and Almeida Young Company.

Cole wants to continue telling important stories. “Steve has dedicated each film to George Floyd and the victims of police brutality, and I want to carry that on, telling stories that really matter and can educate,” he says. “There are a lot of stories that have been kept under wraps or suppressed. I want to tell stories that allow those voices to be heard.”