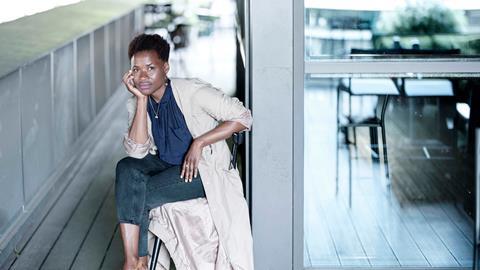 Debut feature Girl, which Adura Onashile began shooting in September, is inspired by the filmmaker’s experience growing up with her mother in the UK in the 1980s. The pair required escorts to and from their council flat in a racist National Front stronghold. “The relationship I had with mum was beautiful,” says Onashile, who was born in London and raised between the UK and Nigeria. “I couldn’t play outside of school, so she created fun in the house. I’ve always wanted to write about that, how beauty can exist in spite of fear and danger.”

The self-penned Girl was on the 2018-19 run of UK financing scheme iFeatures, and is produced by Rosie Crerar and Ciara Barry of Glasgow-based Barry Crerar, with production partners BBC Film, BFI and Screen Scotland. It follows the “claustrophobic” relationship between a mother and daughter, which changes as the daughter longs for the outside. Production is taking place in Glasgow, where Onashile lives and works.

As an actress, Onashile has a background in physical theatre, having played roles for the National Theatre of Scotland and the Royal Shakespeare Company, as well as leading August Strindberg’s Creditors at Edinburgh’s Royal Lyceum Theatre in 2018.

Her 2016 play Expensive Shit, about a Nigerian toilet attendant in a Scottish nightclub, launched at the Edinburgh Fringe as Scotland’s first all-female, all-Black play. Adapting it into a short film with Barry Crerar last year was a useful exercise in editing. “You say, ‘What are the most important bits?’ and then you get rid of everything else,” Onashile says with a laugh. The short debuted at BFI London Film Festival in 2020; development continues on a feature version, which actually began prior to the short.

Working for screen has seen her develop “a level of ambition that I never quite had in theatre”, with goals that include writing for TV and working with UK filmmaker Shane Meadows. The experience of directing has given Onashile an unprecedented feeling of belonging. “I believed film was magic, and magicians made films,” she says. “Now, it feels like you’re doing what you’re meant to be doing.”