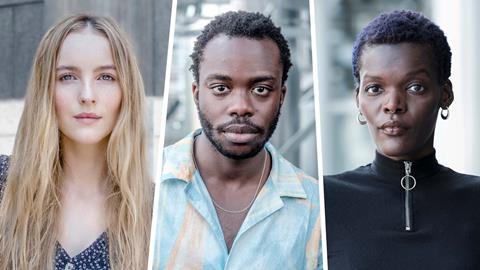 Screen unveils the 2021 UK and Ireland Stars of Tomorrow

Screen International has unveiled the 2021 edition of Stars of Tomorrow, the annual, eagerly anticipated talent showcase of the most exciting new actors, writers, directors, producers, and heads of department emerging across the UK and Ireland.

Since it was launched in 2004, Screen International’s Stars of Tomorrow showcase has demonstrated an unparalleled track record for spotting talented new actors and filmmakers at the early stages of their careers. This year’s Stars follow in the footsteps of some of today’s biggest names in film and television, from Emily Blunt and Benedict Cumberbatch – both selected for the first Stars showcase in 2004 – to Phoebe Waller-Bridge and Taron Egerton in 2014, and Florence Pugh and Jodie Comer in 2016.

The 2020 Stars of Tomorrow were revealed online before participating in a live virtual webinar, with the usual in-person event held to celebrate the Stars unable to take place due to the pandemic. This year’s 2021 cohort also participated in an online virtual event (available to watch on Screendaily.com soon) while also being celebrated at a reception at the Hotel Café Royal on October 14. The 2020 cohort will also be celebrated at this year’s in-person event.

For the second year, Amazon Prime Video returns as the headline sponsor for UK & Ireland Stars of Tomorrow, alongside long-time, returning partners ScreenSkills and the BFI London Film Festival.

Fionnuala Halligan said: “This year’s selection didn’t let the pandemic hold them back – they fought on and are forging careers for themselves which are set to rise even further as restrictions start to fade away. This selection and shoot were held under strict Covid-19 protocols, like last year, but what a relief that we can all celebrate live in 2021. We’re hoping to call our 2020 Stars of Tomorrow back to our event to say an in-person congratulations at last. And we look forward to many more years of Stars of Tomorrow, whether in person, on, or behind the screen, they are all forces to be reckoned with.”

Screen International editor Matt Mueller said: “Congratulations to all of our 2021 Stars of Tomorrow, who really are an incredibly talented and exciting group of actors, writers, directors, producers and heads of department. I’m thrilled that we will be able to celebrate with them in person this year while also introducing them through a virtual event, and I’m also delighted that we can invite our 2020 Stars to celebrate in person with us.”