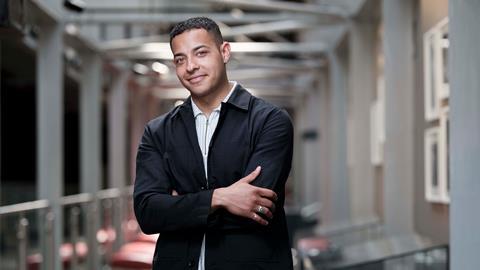 The quiet streets of Norwich in eastern England, following a national Covid-19-induced lockdown, provided an ideal environment for Irish actor Daryl McCormack and his co-star Emma Thompson in the intimate feature Good Luck To You, Leo Grande. “It almost felt like our whole area was facilitated to make this film because we spent so much time together,” says McCormack. “We got so comfortable and got to know each other off-camera.”

In the comedy-drama, scripted by comedian and actor Katy Brand and directed by Sophie Hyde (Animals), McCormack plays a 20-something sex worker hired by a widowed former teacher (Thompson) who is seeking the human connection and good sex that was missing from her marriage.

The pair were kept in the same Covid-19 bubble, away from others, staying in the same accommodation building, walking to and from set together, and spending the majority of each day with one another. “We stepped through the whole film week by week together, which was just a gift of an experience,” says McCormack. “She hadn’t done [a film] like this before either, so it felt as if we were in it together as equals.”

Raised in Nenagh in County Tipperary, McCormack moved to Dublin to study theatre and performance at DIT Conservatory of Music and Drama. After some work in theatre and television in Dublin, he moved to London in 2017. “Dublin didn’t have everything to offer me, I felt there were certain limitations,” he recalls. “Once I got to London, different stories were being told and broader casting going on.”

McCormack joined the cast of Peaky Blinders in 2019 as preacher’s son Isaiah Jesus, taking over the role from Jordan Bolger, and was cast alongside Olivia Cooke and Ben Hardy in Ireland-set road-trip crime comedy Pixie (2020), directed by Barnaby Thompson (St Trinian’s). “It’s funny because I anticipated, coming to London, that I would not be cast as Irish,” he says. “And the first job I got, I was Irish.”