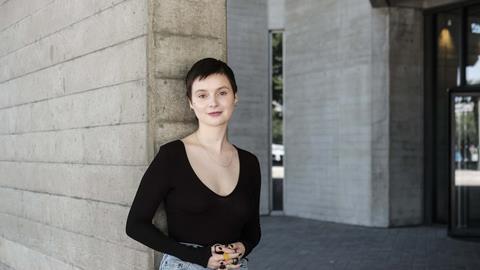 Belfast-born actor Lola Petticrew has risen fast through the ranks since her feature debut in 2019’s ultra-low-budget A Bump Along The Way premiered at Galway Film Fleadh. Nathalie Biancheri’s Wolf, in which she co-stars, has just premiered at Toronto International Film Festival, and earlier this year she shot the buzzy A24, BBC Film and BFI feature Tuesday, in which Julia Louis-Dreyfus plays her character’s mother. “It is the craziest thing I’ve read in a long time,” says Petticrew. “[Writer/director] Daina [Oniunas-Pusic] is an evil genius.” Added to that, she is currently in New York shooting Universal’s She Said, about The New York Times exposé of Harvey Weinstein.

Since A Bump Along The Way, Petticrew has enjoyed an impressive stream of jobs on the small screen — playing a gumptious Jane Seymour in Channel 5’s Anne Boleyn, as James Nesbitt’s daughter in BBC ratings hit Bloodlands, and as a teenager grappling with Northern Ireland’s abortion laws in another BBC drama, Three Families. She also starred in Amazon’s Dating Amber, more of which later. But she nearly ended her career before it had even begun. “I always liked acting, I just never thought it was a viable career option. It was like it was made up,” says the 25-year-old, who grew up in Belfast with healthcare worker parents.

“My friend went to drama school and I realised, maybe people like us can do it. We were two working-class, council estate kids. We didn’t know anyone who was an actor, or anyone who even thought of being an actor. I freaked out and didn’t apply. I was afraid of getting rejected.”

Her friend went ahead and arranged an audition for Petticrew at the Royal Welsh College of Music & Drama. She was accepted and graduated in 2017, but her sense of being an outsider in the industry remains. “You walk into rooms and see 95% of people are not like you,” she reflects. “There’s a feeling of other­ness. When I was at drama school, I was certain I was never going to get work in my own voice. Growing up, you didn’t hear our accents in shows and in films.”

In last year’s Dating Amber, Petti­crew played a lesbian Irish teenager who embarks on a fake heterosexual relationship, with her attachment to the role going beyond a matching of accents. “When I was playing Amber, I wasn’t fully out,” reveals Petticrew, who identifies as queer and non-binary, and uses both she and they pronouns. “The film gave me the courage to start thinking about my own sexuality.”