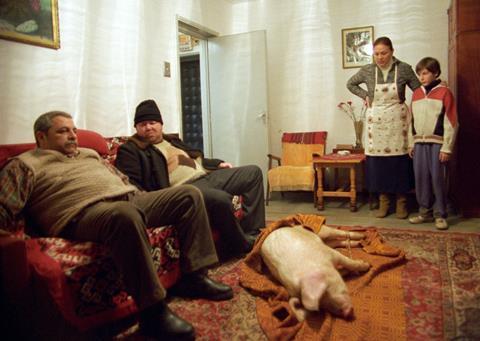 A multi-episode portmanteau comically unseating the propagandist myth that Ceausescu’s Romania was the “golden age” of communism, Tales From The Golden Age is another notch in the country’s film-making renaissance which focuses on day-to-day life under the dictatorship to warm and often hilarious effect. Written by Palme d’Or winner Cristian Mungiu, who also directed one of the segments, it will be a crowd pleasing festival title around the world and could well stir up strong theatrical business in all the former Soviet nations.

International sales have already been plentiful – IFC prebought the US before Cannes – although its prospects in western arthouse markets may be hampered by the portmanteau form itself, an often unpopular style of cinema which rarely connects with audiences.

The version of the film which first screened in Cannes had only five episodes. A third and final screening on Wednesday 20 May will include Mungiu’s second directorial episode, bringing the total running time to 155 minutes. In Romania, the film will be released in two parts – four episodes as Tales Of Authority and two as Tales Of Love. The press notes call it a “film with variable geometry” designed to reflect the fact that Romanian audiences under Ceausescu never knew what to expect when they went to the cinema. Likewise, it was made as a collaborative effort and the individual director of each episode is not identified.

As a portmanteau, it is more coherent than most (ParisI Love You, Eros, Tokyo!, Triangle, Three Extremes) which are often hit and miss. Not only are the five films here consistently strong but the cumulative effect is to offer a surreal portrait of life in Romania in the 1980s where undertones of fear, corruption and imprisonment are never far away from the laughter and spirit which kept the people afloat.

Mungiu’s already significant name and the fact that the film actually generates plentiful laughs will strengthen Tales’ profile in the marketplace. And naysayers who believe that it won’t find an audience need only be reminded that Four Months took over $10m in worldwide grosses, extraordinary results for such a bleak movie.

The central concept here is to take the most well-known urban legends of the period and tell stories to illustrate them.

First film The Legend Of The Official Visit follows a town preparing for an official state visit as the townspeople faithfully obey every whimsical request of the organising committee. The shortest and probably the best of the five films, it’s a wonderfully absurdist portrait of how normal rural folk were forced to behave when officials came to town. When the Party Inspector (Pirvu) gets a phone call saying that the visit has been cancelled, they all get drunk and mount a carousel at a nearby fair.  Unfortunately nobody is left on the ground to switch it off and they spin around all through the night.

Second film The Legend Of The Party Photographer continues the light-hearted vein as the state photographer (Birau) is instructed to touch up some photographs taken on the official state visit of France’s President Giscard d’Estang to Bucharest. The Frenchman appears taller than Ceausescu in the photographs, so he is instructed to put a hat on him to make their heights more level.

The ensuing debacle led to the only day in its history that the party paper Scienteia was not published.

The third episode The Legend Of The Chicken Driver is a more sombre affair, showing how hard it was to come by food in Romania in the “golden age”. Four Months abortionist Ivanov plays the driver of a chicken transport truck who is forbidden to stop on the way to his drop-off point until the night his wheels are stolen and he is forced to go to an inn run by a beautiful woman.

The fourth segment The Legend Of The Greedy Policeman, which will probably become the film’s most celebrated entry, illustrates how good food was used as currency among adults and children alike. When a country relative brings a live pig to a policeman and his family in the city, the family is faced with the dilemma of how to kill the pig. They opt to trap it in the kitchen and gas it, with catastrophic results.

The final segment The Legend Of The Air Sellers, which looks at attempts at private enterprise, also contains some laugh-out- loud moments as a young woman (Cavalioti) and man (Iacoban) plan an elaborate con on various apartment blocks to make money by selling empty bottles.

Bookended by Communist anthems and with its credits featuring footage of various party rallies, Tales film doesn’t feel the need to criticise the lunacy of the regime, but it finds plenty of mileage in its affectionate look at the men, women and children who had to survive it.