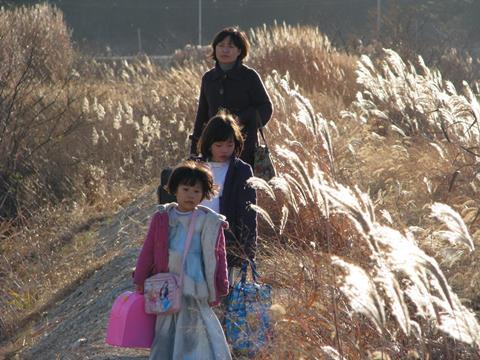 The director tracks their multiple abandonments from nasty urban Seoul to a provincial village and finally to the bucolic paradise of an old-fashioned farm. As in In Between Days, the pacing is slow, yet pitch perfect for the tale that unfolds. It is not for every viewer, and while the technique occasionally feels mannered, the payoff makes it worthwhile.

The film begins in a tiny, seedy apartment in Seoul. The girls’ mother (Lee) decides to search for their missing father, so carts them off to a tiny town and the home of a relative, selfish alcoholic Big Aunt (Mi Hyang Kim). Frequently unfed, Jin and Bin become resourceful, grilling grasshoppers and selling them for food money. Mom has left them a piggy bank, with the understanding that when it becomes full, she will return. She does not keep her word, instead dispatching a letter informing them she is incapable of taking care of them anymore.

Not wanting to get saddled with her nieces and, even moreso, the cost of bringing them up, Big Aunt dumps them at their grandparents’ farm. Their grandfather feels imposed upon, but their grandmother, a principled peasant, displays a warmth they have never known. The rural environment is much more human than the city, the filmmaker seems to say. The journey becomes a passage to maturation for Jin, who has had to bear the responsibility not only for herself but also for Bin.

The filmmaker works wonders with the child actors, who appear relaxed and natural in front of a camera that is nearly on top of them. She kept the crew small, and fed the girls their dialog before each take. Anne Misawa does an excellent job as d.p., and frequent use of unglamorous backdrops such as old brick and stucco walls provide rich but realistic texture as background for the siblings’ adventures in survival.