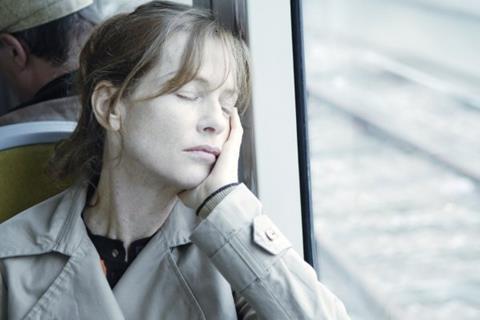 Benoit Jacquot’s Villa Amalia, his fifth collaboration with Isabelle Huppert, is an assured and intriguing exploration of the experiences of a woman who abandons her career and liquidates her possessions to head off towards an unknown future.

Complementing Huppert’s seemingly glacial demeanor, the score is an essential, completely integrated character in its own right

Released by Luc Besson’s EuropaCorp on April 8 on 118 screens nationwide to admiring reviews, this rigorous art film had a very respectable opening locally with 86,633 admissions in first five days for eighth position at the box office. Outside France, festival invitations are a given. While the tandem of Jacquot and Huppert have yet to make a mark beyond French-speaking territories (their highest earner, The School Of Flesh, earned $402,000 in the US on seven prints in 1999), this will attract fans of keenly rendered French art films and especially those starring Huppert.

Based on the novel by Pascal Quignard, whose Tous Les Matins Du Monde became an international hit for Alain Corneau, this spare, relentless adventure excels in sustaining a mood of elliptical existential drama.

From the first frames, in which Ann is tailing another car by night en route to a Paris suburb, Bruno Coulais’ score announces the turmoil and strong emotions to come. Just as she discovers that Thomas (Beauvois), her partner of 15 years, is cheating on her, successful concert pianist and composer Ann (Huppert) bumps by chance into Georges (Anglade) whom she hasn’t seen since they were children. Reconnecting with this sensitive, accommodating man gives gruff, determined Ann the linchpin she requires to shut down her current life and embark on another.

Ann’s actions can be read as an over-reaction to betrayal, but Huppert makes it compellingly real and believable. The film painstakingly goes through the steps it takes to get rid of your valuables, undo professional commitments and close your bank account while preparing to live a life shorn of cell phone, credit cards and mailing address, and through it all Ann feels like Columbus sailing for the New World in miniature.

Camerawork and editing effortlessly convey Ann’s physical trek from the urban confines of Paris though Germany and Switzerland toward the title structure in Italy. Complementing Huppert’s seemingly glacial demeanor, the score is an essential, completely integrated character in its own right.

Although there’s nothing particularly likeable about Ann, she’s a character that the audience will root for.