Why turbulent times may be ahead for China's film industry

China’s film market may be booming, but a trade war with the US and the government’s tax and censorship shake-ups suggest rockier times are to come. 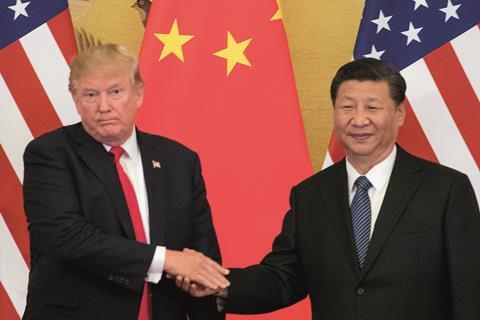 In mid-September, US president Donald Trump made good on his promise to slap extra import duties on $200bn worth of Chinese goods, following several rounds of tariffs on a combined $50bn of Chinese imports earlier in the year. China was quick to retaliate, imposing tariffs on $60bn of US goods. Stock markets around the world were rattled and the International Monetary Fund has cut its global growth forecasts for the coming year.

Since then, the relationship between the US and China has deteriorated further, with Trump accusing China of meddling in the US mid-term elections, and Chinese president Xi Jinping preaching his nation’s need for self-reliance. While Trump has been citing a trade deficit and China’s “unfair policies and practices” as justification for the tariffs, China sees this as a simple matter of the US attempting to contain its economic rise.

None of this has had a direct impact on either the US or Chinese film industries. Although “35mm film and sound recordings on motion picture film” were mentioned in the US list of Chinese goods subject to tariffs, the US has a trade surplus with China when it comes to film, rather than a deficit.

So far in 2018, the biggest US import in China, Avengers: Infinity War, grossed $360m, while the biggest Chinese film in the US, Detective Chinatown 2, took only $2m. Some industry observers believe it is unlikely China will target Hollywood films as they bring in revenue for Chinese state-owned companies as well as the US studios.

However, others believe there is a possibility China will feel it has to resort to targeting the US film and TV industries as the trade war escalates. “Fundamentally, the US imports far more Chinese goods than China import US goods,” says Adams Lee, an attorney and trade specialist at international law firm Harris Bricken. “China is running out of products it can impose tariffs on, so it now needs to consider other ways to retaliate against the US without harming its own interests.”

There are also indirect ways in which the trade war could impact the film industry. Firstly, it has derailed negotiations between the US and Chinese authorities on import quotas and other business practices surrounding the distribution of US films in China, which were meant to replace an existing agreement that expired in February 2017.

It is understood the US was close to a new agreement earlier this year, which would have expanded the present quota of 34 revenue-sharing films per year, but talks are now on hold, not just because of the trade war, but also because of China’s recent restructuring of its regulatory framework (see below).

“The two sides are still in contact, but everyone thinks it’s not appropriate to apply pressure in this environment,” says one US studio executive who prefers not to be named. “The Chinese side is aware that the studios don’t necessarily support Trump, but we’re an exporter and a soft target, and it could create some painful headlines for Trump to be told your films can’t come in.”

Secondly, the trade war is dragging down the Chinese economy. That will have a knock-on effect for Chinese companies, particularly China’s technology giants, who are now also deeply invested in the country’s content industries through production, online ticket sales and streaming. Indeed, some observers have described the ongoing spat between the US and China as a tech war, rather than a trade war, with Trump accusing Chinese tech companies of stealing US intellectual property and attempting to restrict their investment into US firms.

Again, China sees these accusations as an attempt to block its rise as a technology superpower in areas such as artificial intelligence, robotics and quantum computing. The country’s Made In China 2025 initiative — an attempt to make China a major competitor in advanced manufacturing — has been described by US think tank, the Council on Foreign Relations, as a “real existential threat to US technological leadership”. Ironically, the main headache for China’s tech giants so far in 2018 has not been worsening US-China relations, but the regulatory environment in its own backyard.

Since around March this year, Tencent, and to a lesser extent Baidu and Alibaba, have seen their stocks pummelled, and while China’s slowing economy has been a factor, a bigger issue has been the government’s new regulatory structures and tighter rules.

Tencent, which makes a big chunk of its revenue from video games, had more than $250bn wiped off its market value after the government cracked down on the sector, due to concerns over inappropriate content and teenagers addicted to gaming. And while iQiyi’s stock has recovered following a bumpy IPO on the Nasdaq in March, all of China’s streaming platforms must now grapple with new restrictions on foreign content, along with heavier-handed censorship of locally produced TV shows and films.

Production at a standstill

Likewise, China’s traditional production and distribution companies are in a state of panic following the government’s recent clampdown on tax evasion. In early October, leading Chinese actress Fan Bingbing reappeared in the public eye following a mysterious three-month absence with a grovelling apology for her alleged tax evasion and a $129m fine.

As China watcher Bill Bishop wrote recently in his Sinocism newsletter: “Penalising [Fan Bingbing] makes a lot of sense because so much money is involved, and also because she’s the perfect target to use to reiterate the Party’s point that it’s serious about cleaning up the entertainment industry both financially and ‘spiritually’.”

Until Fan made headlines, China’s film industry had been on a roll with local productions grossing a combined $4.5bn for a 66% market share in the first eight months of 2018, compared to a 53% share the previous year. China’s overall box office, including Hollywood and other international productions, has also continued to climb, sailing past the $7.3bn (rmb50bn) mark in early October, around two months earlier than in 2017.

But now local production is grinding to a standstill as the tax bureau is insisting all entertainment firms — including production companies, talent agencies and celebrity-owned studios — submit tax filings from 2016 to 2018. Investors are pulling back, due to concerns over actors’ use of fake contracts and rumours that taxes on production investment will be increased. Film companies are fleeing tax havens such as Khorgos, a small city on the border of Kazakhstan in a remote corner of northwest China, that is unlikely to have ever seen many real film producers or stars.

While the release schedule for the rest of 2018 and the early part of next year — including the lucrative Chinese New Year holidays in February — has mostly already been set, there may be a drought of new productions later in 2019. This in turn could impact Hollywood imports as the Chinese authorities always try to maintain a balance between the market share of foreign and local films.

None of which means foreign companies should give up trying to work with China — but more than ever they need to be aware of the shifting regulatory, economic and political sands. The issues surrounding China’s tax clampdown and more restrictive censorship climate are likely to grind on for some time, which might be painful in the short term, but could result in a cleaner, less over-heated and more professional film industry.

As for the US-China trade war, at the time of writing in mid-October, it looked as if Trump and Xi would meet to discuss their differences at the G20 summit at the end of November.

“If all goes well and there is a breakthrough, this may end early,” says William Perry, also an international trade expert at Harris Bricken. “If not, this war will go on for a year at least.”

China’s local film and TV industries are still trying to figure out the impact of a massive overhaul of its regulatory infrastructure, initiated by the government in March.

Two new regulatory bodies have been established. There is a new-look Film Bureau, headed by Wang Xiaohui, which oversees theatrical production and distribution, including co-productions, while the National Radio and Television Administration (NRTA), headed by Nie Chenxi, oversees the TV industry and also appears to have some oversight of online video platforms.

The two bodies replace the State Administration of Press, Publications, Radio, Film and Television (SAPPRFT), which was abolished this year. The new Film Bureau sits directly under the Propaganda Department of the Chinese Communist Party, suggesting much tighter supervision of the film industry.

So far, it remains unclear what impact the restructure will have on film censorship — possibly the officials involved are still not clear — although the government has sent fairly clear messages that all content should uphold Party values. The US studios and other foreign distributors are now submitting their titles to censorship three months before the targeted release date — a whole month earlier than usual — to ensure they get cleared in time.

“As nervous as we are, the local Chinese producers are even more nervous because, worst case scenario, we can either make cuts or distribute the film in other territories, but the risk profile for local producers goes up significantly,” says one US distributor, who prefers not to be named.

Meanwhile, China has started clamping down much more tightly on the TV and online video sectors. In July, the government issued new rules restricting reality shows, particularly those that encourage “money worship”, and demanding more programmes that “spread positive energy” and “promote core socialist values”. In recent months, there has been an increase in the number of shows taken down from streaming sites — including Guardian (Zhen Hun) based on a gay-themed sci-fi novel and the Chinese version of Saturday Night Live.

Then in September, China published draft legislation that increases restrictions on foreign content on Chinese TV and streaming services. Foreign content is banned completely during primetime hours and throughout the rest of the day is restricted to no more than 30% of total daily airtime on broadcast TV channels. Online platforms also have to limit foreign content to 30%. NRTA said the restrictions were necessary for the “protection of social stability” and to limit content that “deviates from core socialist values”.

While the implementation of these rules is still being worked out, they are likely to have a serious impact on the broadcast and streaming of foreign films and TV shows in China. One of the new regulations requires NRTA to publish and maintain a catalogue of overseas programmes approved for streaming, a new development that could significantly slow down the censorship process for VoD platforms, at least in the early stages of applying the new rules.