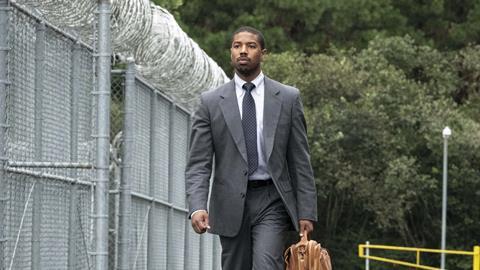 With ‘Just Mercy’, Michael B. Jordan is using the inclusion rider to change Hollywood

At just 32 years old, Michael B Jordan is influencing Hollywood to change for the better with social justice drama Just Mercy. He tells Screen how he plans to make a difference.

It began in 1999 for Michael B Jordan, with a blink-and-you’ll-miss-it appearance on HBO’s The Sopranos when he was 12 years old. Fast forward two decades and he is now one of the most influential actors in the industry.

Following his frequent collaborations with director Ryan Coogler, ranging from the award-winning Sundance hit Fruitvale Station to Marvel Studios blockbuster Black Panther, he has rapidly secured a prominent place as one of Hollywood’s most in-demand actors. But that, it seems, was just the start.

During the 2018 Academy Awards, Jordan was listening keenly to Frances McDormand’s acceptance speech for best actress in Three Billboards Outside Ebbing, Missouri. In the address, she stated: “I have two words for you — inclusion rider.” At the time, these words meant little to those outside the industry, but they sparked something in Jordan’s mind. The inclusion rider allows actors, along with others in the industry, to put a clause in their contracts that stipulates diversity in the hiring of cast and crew.

“I was like, ‘Oh! So, there’s something in writing I can put in place to make sure our cast and crew is a reflection of the world I live in, and is diverse?’,” says Jordan, who is speaking down the phone from Berlin. He is in Germany shooting Paramount’s Without Remorse, directed by Stefano Sollima (Sicario: Day Of The Soldado) and based on the 1998 Tom Clancy novel.

Without Remorse is also being produced by Jordan’s production outfit Outlier Society — which he founded in 2016 — working closely with former Paramount vice president Alana Mayo as head of production. By March 2018, within a month of McDormand’s speech, he insisted his company adopt inclusion riders. Again, this was just the beginning.

Jordan had worked with Warner Bros on box-office hits Creed and Creed II, and was now linking up with the studio on Just Mercy. “I am really fortunate [to] have a partner like Warner Bros, who ran towards it and embraced it,” he says. “They asked us to work hand-in-hand to write their inclusion policy for Warner Media. Now all companies under Warner Media are using this inclusion rider and that’s how they hire now.” The fact that what he calls “arguably the best studio in the world” is not only listening but acting on his words shows just how influential Jordan has become.

Just Mercy — helmed by Short Term 12 director Destin Daniel Cretton — will be the first film from his production outfit alongside Warner Bros to have used the inclusion rider, ensuring a level of diversity that reflects contemporary society. “It’s a step in the right direction,” explains Jordan. “There’s a long way to go, but it ensures some fairness. I’m extremely proud of this project for many reasons, but that is definitely one of them.”

Warner Bros gives a limited release to Just Mercy on Christmas Day in the US before going wide, following a tour of North American film festivals including Toronto, Mill Valley, the Hamptons, Philadelphia, Chicago and AFI Fest. It is based on The New York Times bestselling memoir of social justice activist and lawyer Bryan Stevenson, who has waged war in courtrooms against the systematic bias facing people of colour in the US justice system.

The backbone of the book deals with the lawyer’s most famous case involving Walter McMillian, who was sentenced to death for the murder of a young white woman in Monroe­ville, Alabama — incidentally the hometown of To Kill A Mockingbird author Harper Lee.

Jordan takes on the role of Stevenson, a man he admits he knew little about before beginning the project. Over the four years the film was in development, he began to realise the pressure of playing someone who has battled the Supreme Court of the United States five times. “I realised how dedicated and how focused he was. I had to get this right,” he explains. “It helped that I had phenomenal screen partners like Jamie Foxx, Brie Larson and Rob Morgan.”

Foxx, who plays McMillian, has followed Jordan’s career since he arrived in Hollywood, and the pair have become close friends, with Foxx proving to be something of a mentor. Their friendship and level of trust were vital to the film’s anchor performances: “We could experiment and push things, it was very special working that way.”

Jordan — who has yet to earn an Oscar, Bafta or Golden Globe nomination, but was part of the winning best ensemble cast at the Screen Actors Guild Awards for Black Panther in 2019 — knows Just Mercy is a different type of project to the big commercial hits on his resumé. “We aren’t trying to crack $400m at the box office,” he says. “A story like this isn’t set up for the money. It’s set up for the awareness, to educate, to provoke thought and reach a certain circuit.”

Jordan, in his position, wants it all — to produce the commercial big hitters and then leverage his influence in the industry to make a real difference and pay it forward.

“Not everything is about money when it comes to being important,” he says. “As a performer, you’re like an investor. You can’t invest in one thing — you have to diversify your port­folio. Investors are always telling you it’s your 401k [retirement savings plan], you’ve got your investments, your stocks and bonds. It’s the same with film, you have to diversify. It’s about making a change and about making an impact on people.”