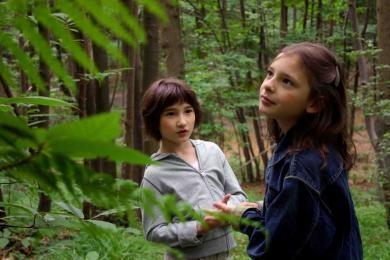 Co-director and French actor Hippolyte Girardot possibly held sway with Nobuhiro Suwa, normally a more extreme art house type of director, to produce a “normal” film in Yuki & Nina – it could even be called a children’s movie. Marketing it could be quite a challenge, though, since it is neither cute enough to charm the tots nor perceptive enough to catch their parents’ fancy, while an unexpected twist towards the end may still prove insufficient to carry the film all the way into the arthouse arena.

This straightforward tale of 10-year-old Yuki (Sampy) deals with the painful circumstances of her parents’ divorce. Her father is French (Girardot), her mother Japanese (Tsuyu), and they are about to separate. The mother wants to leave Paris and go back to Japan with her daughter, and the father seems happy with the decision. Yuki, however, refuses to leave her best friend Nina (Moutel) behind. While she speaks Japanese, Yuki has never been to Japan and doesn’t want to go; nobody seems to care outside Nina.

When all other subterfuges, including a letter from the Love Fairy to Yuki’s mother asking her to reconsider her decision, fail, the two girls run away to the country house of Nina’s estranged father (her parents are divorced as well) and from there to the nearby woods.

Told very much from Yuki’s point of view - the camera is mainly placed at her eye level - Suwa and Girardot try to show how little parents perceive of the universe their children inhabit. Suwa, who directed A Perfect Couple, which dealt with marital breakup from a purely adult perspective, is less intent here on prolonged shots and extensive silences and does not test the capacity of his audience to look beyond what is presented to them (with the exception of the last part, which offers a brief poetical visit into the fantastic).