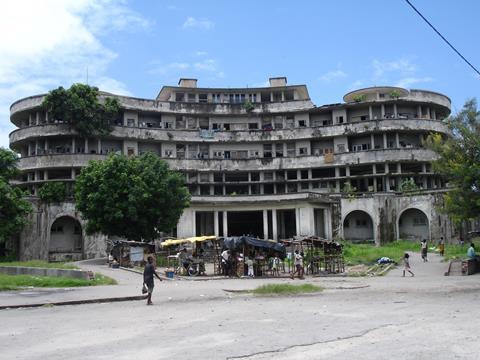 The life story of the once fabulously opulent Grande Hotel, which once stood majestically overlooking the ocean in Beira in Mozambique, makes for fascinating viewing in Lotte Stoops absorbing documentary Grande Hotel.

Director Lotte Stoops blends her contemporary footage with photographs and old film of the Hotel in its prime.

The film, which premiered at the Rotterdam Film Festival could well appeal to niche broadcasters and other festivals, especially those with the social consciousness theme or that like to focus on architecture. Theatrical releases – especially given its 67-minute running time – are unlikely.

The sumptuous hotel was built in 1955, and standing a massive 12,000 metres but only having 110 luxury rooms, it stood testimony to the Portuguese colonial control of Mozambique.  But a revolution and civil war put paid to its purpose – and now some 60 years later the Grande Hotel is a crumbling shell, and home to around 2,500 permanent ‘guests’ who make sure of every nook and cranny to try and create a safe environment to live.

Director Lotte Stoops interviews a wide group of people involved in the Grande Hotel – ranging from the daughter of the former manager through to current residents, blending her contemporary footage with photographs and old film of the Hotel in its prime.

Once of the first ‘occupiers’, named Dilat, arrived 31 years ago when the building was still in perfect condition, but has slowly seen it dismantled with furniture and fittings gradually sold or re-used, to the situation now where even stones from the building itself are being sold off.