In Search Of Oil & Sand 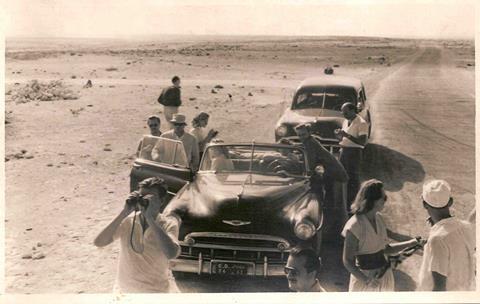 An entertaining and fascinating glimpse into the lives of the wealthy social elite of Cairo just prior to the coup d’etat of 1952, In Search Of Oil & Sand works as both historical detective story and political analysis, and while modest in terms of running time it is an easy fit for television channels, especially those with history sections. Its film history element will also make it attractive to other film festivals.

Mahmoud reconstructs the strange story of the ﬁlm production and its array of real-life players, as well as their subsequent fates in a post-monarchial Egypt as the Cold War begins.

The film, which is co-directed by Wael Omar, Philippe Dib follows the efforts of Mahmoud Sabit to sift through family archives to unearth material relating to his father Adel Sabit, an Egyptian royal cousin and insider, and his mother, Frances Ramsden a rising Hollywood actress, who were part of the Zohreya Set, a group of royals, diplomats, and aristocrats that had formed around Princess Faiza. The film had its world premiere at the Abu Dhabi Film Festival.

Soon after the Black Saturday of January 1952 when Cairo burned and witnessed massive rioting, Frances Ramsden came to town. She had featured in Preston Sturges’ 1947 film The Sin Of Harold Dibbledock, and with her husband Adel Sabit socialised with Princess Faiza - sister of Egypt’s King Farouk - and her husband Mohammed-Ali Bulent Raouf.

Led by Bulent, this wealthy elite set about making a film, to be called Oil & Sand, about an archaic leader trying to regain control of his kingdom after being ousted in a coup. With cast members including staff from the British and American embassies (who played characters out of Egyptian oil) and Princess Nevine Abbas Halim (who played a kidnapped American woman), and recruiting local Bedouin to play rebels, what started out as simple fun ended up as an oracle foreshadowing the turbulent events soon to come.

Some six weeks following the production of this ﬁlm, a real coup d’état would depose and exile the King of Egypt in favour of a military command council.

Sixty years later, a series of 8mm ﬁlm reels of Oil & Sand emerge from the attic of Mahmoud Sabit’s father’s faded Cairo home, and he sets about piecing together the history of the film, his parents and this social group that got caught up in a story of love and adventure at a pivotal moment in Egypt’s history.

Mahmoud reconstructs the strange story of the ﬁlm production and its array of real-life players, as well as their subsequent fates in a post-monarchial Egypt as the Cold War begins. Most fascinating is an interview with the only surviving cast member, Nevine Abbas Halim, who vividly recalls the opulent time as well as the traumas to come after the July 1952 coup d’etat. Rewatching the footage she comments engagingly: “I’m a really bad actress”.