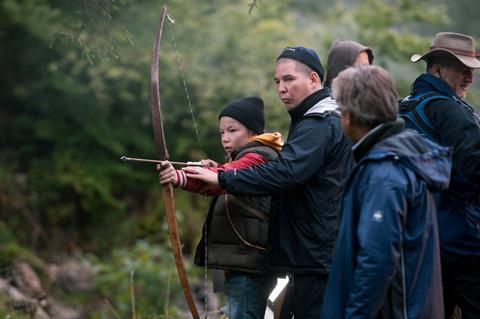 Finnish director Jalmari Helander follows his hit genre film Rare Exports with action thriller Big Game, starring Samuel L Jackson as a US president who has to depend on a local boy (Onni Tommila) to survive in the Finnish wilderness when Air Force One is shot down.

The film premiered on Friday in Midnight Madness/Next Wave; Altitude handles international sales and co-represents US rights with WME.

Jalmari Helander: I was crying. It was a big thing to see it with an audience and especially because the audience seemed to love it. It was the best screening ever. Everybody was saying that they had never been at a premiere like that… People were shouting and clapping their hands many, many times during the movie and laughing and living in the movie.

Helander: Onni hadn’t seen the film before this.

Tommila: I really didn’t expect it would be so great because I had seen only bit parts.

Onni is your nephew, so what was it like directing him?

Helander: I wrote the movie for him.

Tommila: I think it’s easier to talk about everything everyday because he’s my uncle.

Helander: We did Rare Exports together. There’s been lots of things we’ve done.

How was it to make your first English-language film?

Helander: I don’t see the difference. The feel was quite interesting because when I was watching the tapes and directing and sitting by the monitor, I felt like I’m watching a movie because it’s real actors just speaking English.

What inspired you to make this movie?

Helander: Most of the inspiration, as you probably noticed, is from the ‘80s and the movies I love, like E.T. There’s a bit of Cliffhanger in it and Indiana Jones.

What did you want audiences to take away from this film?

Helander: I’m happy it’s so honest and a lot of fun. I don’t want to watch movies where people are in the kitchen and fighting and there’s divorces. It’s important to give people something worth experiencing. Something you can’t see in normal like. You want to see something you can be happy about in the end.

What was it like working with Samuel L. Jackson? Did he teach you anything on-set?

Tommila: I was quite nervous when we met in his hotel but we became friends. We talked about movies…

Helander: You talked about farting.

You could have done a film entirely focused on the President being endangered but you could have also made a film that focuses solely on a boy in the wilderness, and yet you blend the two into a hybrid.

Helander: That was the idea. It starts like it could be a Danish movie and then you see Air Force One. It’s nice to have these two worlds crash together, to have the least powerful man on the planet and the most powerful man.

Why did you film in Germany instead of Finland?

Helander: Finland isn’t anything like Germany. Finland is flat and boring. We filmed in the Black Forest and the Alps. I’ve always loved big mountains and I think that filming on location is something that every director should take seriously… It gives you an authentic feel, like something big is happening. And the helicopter shoots were great. I could do that everyday.

What kind of training, if any, did you receive for filming the wilderness scenes?

Tommila: Just ATV driving, which was really fun. I did like three hours of training with professional guys and then filmed driving like 3 metres forward. We had stunt guys driving the ATV but the training was fun.

Usually Samuel L. Jackson is the one dispensing the kick-ass, but he’s much more vulnerable in this film.

Helander: When we were choreographing the fight sequences, the stunt coordinator offered Sam some cool things to do but he didn’t want to take any of those. He wanted to look like a girl who’s trying to fight.

How the hell would a president know how to fight? He doesn’t know things like that. He wanted to look really fucking bad. He really wanted to be kicked and hit in the face and it was important for the role. But he had one wish: to kick the terrorist in the balls.

Tommila: I’m going to school on Monday. I’m actually excited for that because I want to see all my friends. I think they’re really excited about this film.