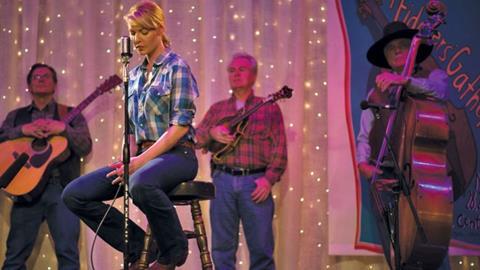 Down and out folk singers still ride boxcars and snowy small-town Utah provides warm chicken soup for America’s recessionary soul in Ami Canaan Mann’s romantic dramedy Jackie & Ryan. The surprise is that despite the film’s repeated recourse to Americana cliché, Jackie & Ryan turns out to be a tender, affecting music-driven love story about a street-musician drifter and a single mom who has returned to her hometown on the verge of a custody battle.

Heigl conveys a subtle mix of strength and vulnerability in her performance, the former coming to the fore in a neatly edited third-act sequence that interleaves a New York trip in which she takes on her ex, with a recording session in which Ryan presents his original material.

The Katherine Heigl career reboot starts here, but the film also provides Ben Barnes with his first really satisfying role since the Narnia films – and it’s the chemistry between the two leads, and an undertow of cool-headed realism in the script’s presentation of what is at first a wary romance on both sides, that redeem the occasional lapse into Main Street mawkishness. Apparently Mann did some serious research into the busker lifestyle and hopped trains herself to get the detail right: certainly, though the light may always be golden as those trains roll on down the track, there’s nothing else that feels false about these particular scenes.

The film looks and sounds a little richer than its 20-day shoot and $2 million budget would suggest, partly due to some crisp, thoughtfully framed cinematography from cinematographer Duane Manwiller. After its well-received Venice debut and Toronto follow-up, it wouldn’t be a surprise to see a few distribution deals kick off, with the marketing people no doubt reaching for comparisons like “Once meets Inside Llewyn Davis”.

Barnes plays Ryan, a quiet, serious drifter musician who train-hops into a snowy Utah town where he has connections that include fellow busker Georgie (Werner) and Virginia (DuVall), a young mother who is the partner of Ryan’s musical mentor Cowboy. The latter rode a train out of town a week before Ryan got in, and in his absence, the script suggests, the folkster has to learn to let go of the Dean-Moriarty-like father figure that is stopping him from being quite the free spirit he seems.

A chance encounter puts Ryan in the way of Jackie (Heigl), a former pop singer who has come back from New York to live with her mother and sweet but self-assured young daughter. She and Ryan are very different – she a smart minor celeb depressed by the way she chose to dumb down her musical talent and hedged in by family, property and a messy divorce, he a near-penniless drifter whose focus on his musical craft both fascinates and reproaches her. But there’s a spark, and Ryan is soon mending the broken roof tiles of Jackie’s family home, watched over by a mother with some experience of the world’s ways who doesn’t much approve of the liaison, and a daughter who thinks Ryan is kind of okay.

Though a few scenes (like a cozy family hoedown at a local music club) tip from warmth into schmaltz, mostly the story keeps its eye on character, deftly sketching a romance that is also a struggle of two people with their own demons – Ryan with his inability to stop playing other people’s songs and actually write something, Jackie’s with her tendency to walk away from conflicts like her soon-to-be-former husband’s aggressive child custody maneuvers. Heigl conveys a subtle mix of strength and vulnerability in her performance, the former coming to the fore in a neatly edited third-act sequence that interleaves a New York trip in which she takes on her ex, with a recording session in which Ryan presents his original material.

Discount supermarkets and rusting industrial belts form the backdrop to a story that uses the sort of folk, blues and bluegrass that Woody Guthrie was schooled in and which has been rediscovered by a new generation of neo-folk bands like Mumford and Sons, to draw parallels between today’s hidden American poverty and the Great Depression. But this is also a women’s film in which the sensitively-conveyed bond between three female generations of one family seem destined to be much stronger than any ties with the men who drift in and out of sight – even the nice, guitar-strumming ones who are good in the sack.