'Jumanji: Welcome To The Jungle' set for China adventure 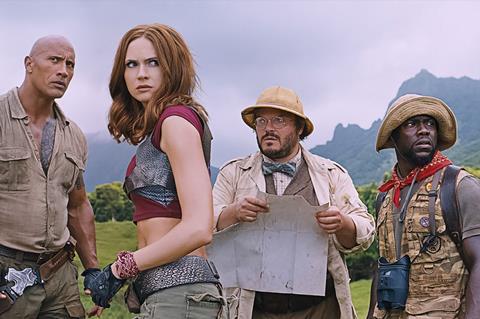 Jumanji: Welcome To The Jungle gets the China test this weekend as it eyes another dominant international session, while eyes will be on The Disaster Artist in the wake of allegations against Golden Globe winner James Franco.

Jumanji starring Dwayne Johnson ruled the roost last weekend on $70m and stands at more than $304m through Sony Pictures Releasing International (SPRI) and $560m worldwide as it heads into the second biggest market on the planet.

While Star Wars: The Last Jedi has underwhelmed in its first week in China, hopes are high among Sony brass that Jumanji has what it takes to enthrall local audiences.

Johnson is popular in the territory: The Fate Of The Furious – admittedly an ensemble piece and established franchise – finished on $392m last year to become the biggest release of all time in China, while San Andreas grossed $103m in 2015. Legendary’s Skyscraper is set in China and is in post.

A strong debut will almost certainly see Jumanji, which also stars Kevin Hart, Jack Black and Karen Gillan, swing past $400m either this weekend or shortly after.

SPRI unleashes Insidious: The Last Key in the UK, the Netherlands and Turkey, among others, and a healthy session should take the Blumhouse horror from its $27m perch past the $40m mark.

The Last Jedi stands at $655m through Walt Disney Studios Motion Pictures International and at least $1.235bn worldwide. Executives expected the sci-fi to overtake The Fate Of The Furious on $1.236bn on Friday to rank as the eleventh biggest film of all time worldwide.

Question marks remain over the roll-out of The Disaster Artist after five women have levelled allegations of inappropriate or sexually exploitative behaviour by director and star James Franco. The comedy has reached an early $5m and studio executives have not returned calls to Screendaily to walk through their distribution strategy.

Father Figures on an early $1.9m opens in Russia, while Justice League stands at $427.2m.

Fox International’s The Greatest Showman on $80.9m arrives in Norway, and Liam Neeson thriller The Commuter debuts in Malaysia. Animation Ferdinand on $116.8m opens in Brazil, while No Dormiras arrives in Argentina and Uruguay.