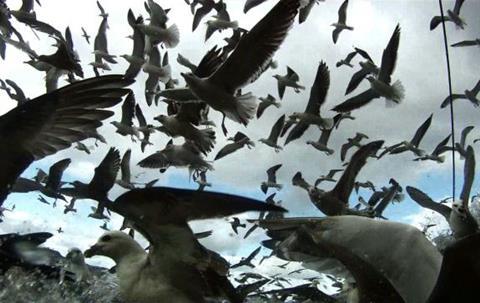 This impressionistic documentary on fishing at night in the waters of Melville’s Moby Dick is supposed to impart the physical experience of being actually on board and assisting at close range (sometimes impossibly close) in every single operation taking place there.

Both image and sound are doctored and manipulated to the point of losing their identity, creating a kind of audio-visual symphony in which man, nature and machines alternately clash and intermingle.

As improbable as it is that a regular film audience would like to share in this grueling test on the eyes and ears, eventual help from reviews praising the originality of the initiative and the intensity of its sensory impact might ease its way into more festivals and venues unafraid of challenging their audience to the extreme.

Like any other self-respecting installation, there is no narrative here, no dialogue and no characters, the images are all evidently taken by handheld digital cameras, usually from angles and distances which are supposed to prevent any immediate recognition of real shapes and forms emerging on screen out of the darkness engulfing it.

When discernible, there are waves washing over the camera, cranes lifting fish nets up, fishermen at work sifting through their daily catch, fish parts being washed off into the sea, seagulls flying up above and diving every once in a while for their prey, a man standing at the wheel of the ship or sitting by a table sipping something out of an apparently empty cardboard cup.

The same goes for the soundtrack which dwells on the waves, the chains, the motors, the squealing gulls, fish being dropped on the deck, unintelligible gibberish emerging from walkie-talkies or the short wave radio, the hum of the motors all carefully spread through the sound system.

Both image and sound are doctored and manipulated to the point of losing their identity, creating a kind of audio-visual symphony in which man, nature and machines alternately clash and intermingle, in a restless, disturbing, repetitive effect, certainly hard on the audience but arguably essential for the experience the filmmakers are trying to convey.

All this fills up the better part of an hour and a half, but the two ends could easily be spliced together into a perpetual loop running on forever or at least for as long as it takes to complete the ship’s journey. Or the whole thing could be cut up in the middle, without affecting too much the final result.

A quotation from the Book of Job sets the mood at the beginning, a dedication to sailors who perished at sea comes at the end, followed by a list of all the human and fish participants featured on screen, the first identified by their names, the others by their species, in their original Latin denomination.  How complete that is, very few film critics will be able to tell.