Locarno continues its quest to support the next generation of directors, critics and now industry professionals, as Sarah Cooper discovers. 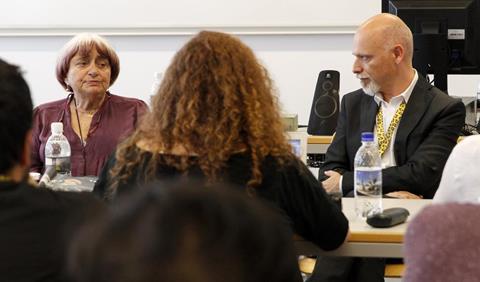 Locarno may be famous for celebrating the old masters of cinema, but since the establishment of its Summer Academy in 2010, the festival has also become a hub for the film-makers of tomorrow.

As well as the Filmmakers Academy, the programme also includes a Critics Academy for up-and-coming film critics and journalists, a Documentary Summer School for producers and the Cinema And Youth programme for local college students, each of which run for the duration of the festival. New this year is the Industry Academy to support the next generation of European distributors, sellers, programmers and marketers.

“Each of the academies have their specific features, but we want all the young people to feel like they are part of one thing,” says Sophie Bourdon, head of Locarno Summer Academy’s training development.

During the festival, participants have access to high-profile film-makers, script advisers, festival heads and selectors, and in return the presence of the enthusiastic academy attendees brings a welcome injection of young blood to Locarno.

Headed up by Locarno born and based film-maker and journalist Stefano Knuchel, the Filmmakers Academy is a boutique programme open to emerging film-makers from around the world, made up of workshops, round-table sessions and talks from established names including in previous years Agnes Varda and Werner Herzog.

This year, speakers will include director Michael Cimino and actor Edward Norton. Thanks to a partnership with Red Bull’s Music Academy, the participants will also be treated to a lesson in music supervision from Sofia Coppola’s regular collaborator Brian Reitzell, whose composing credits include Lost In Translation.

“We help them focus on finding their identities as film-makers and finding the right support to defend their kind of cinema,” Knuchel says of the main purpose of the programme.

This year only 18 film-makers - six of whom have already taken part in the Cannes Cinéfondation’s Résidence du Festival - are being invited to take part in the academy, instead of the usual 25. “I want to know every single one of them and their work. I choose people who I think I can help,” says Knuchel who this year has selected participants from countries including Malaysia, Serbia, Bosnia, Taiwan, Morocco and Vietnam.

“Last year there were more male directors taking part, but this year there is a good balance and I have been particularly impressed by the women,” adds Knuchel, who says he always makes it his aim to introduce the budding film-makers to the right people. “We want to give them the opportunity to have face-to-face meetings with the people who are really going to be interested in their work.” Paraguayan film-maker Marcelo Martinessi, who took part in the academy in

2013 having made two short films (Karai Norte and Calle Ultima)describes the experience as “essential for meeting people and expanding my network and an ideal setting to rethink my own work”.

“There are a lot of training initiatives but most of the time they are really focused on film-making and producing. We wanted to provide an opportunity for the new generation of distributors, programmers and marketers and make sure young people know how exciting these jobs can be,” explains Bourdon, who has been impressed by the “entrepreneurial spirit and curiosity” of the applicants, who include representatives from France’s Doc&Film International and the UK’s Soda Pictures.

Along with talks and meetings, participants will take part in a workshop where they will be expected to create a marketing plan of one of the films being screened at the festival. And, crucially, there will be a crossover between the festival’s industry activities and the academy itself.

“All our participants will be invited to take part in key industry activities such as StepIn and the festival’s industry happy hour as well as having the chance to connect with others taking part in the academy,” says Bourdon. “It’s about creating a network of contacts that isn’t exclusively in their own areas.”