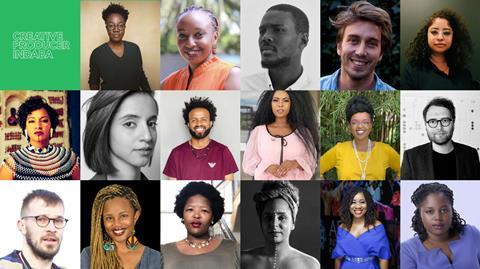 A new initiative to develop and empower African producers has selected its first intake of talent.

Seventeen producers have been selected for the inaugural Creative Producer Indaba scheme, which has been developed by Realness Institute in partnership with Sundance Institute, International Film Festival Rotterdam and European training outfit EAVE.

The year-long training programme will include masterclasses and one-on-one meetings with assigned mentors to address topics such as project development, financing, marketing and advocacy. The first workshop will run online for two weeks from August 28.

The scheme has also selected a small number of producers from outside the continent, who aim to co-produce in Africa and forge connections with the international market.

Participants with career development focus are:

The second workshop is set to take place during the 50th edition of IFFR in Rotterdam in January 2021 and will focus on packaging, financing and distribution. The programme will culminate with the presentation of a package that consists of a screenplay and strategic plans at an African co-production market in the second half of 2021.

“The media landscape of Africa is swiftly changing and the importance of local producers that have the training to catalyse the growth of their local markets is paramount,” said Realness Institute co-founder Mehret Mandefro.

“Indaba will make sure African talent is well-positioned to capitalize on the opportunities their markets present and ensure that the media sector can become an engine for economic growth and development across Africa.”

The new initiative builds on Realness’s screenwriting residency, which has launched 20 film projects in 13 African over the past four years and saw Lemohang Jeremiah Mosese’s 2017 project This Is Not A Burial, It’s A Resurrection win a jury prize at Sundance in January.