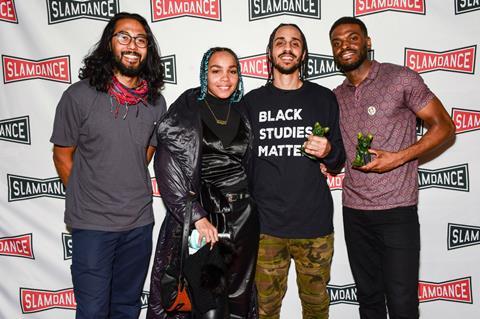 An annual award from Slamdance alumni Joe and Anthony Russo was among prizes handed out at the festival’s 26th edition came to a close in park City on Thursday night (30).

Festival brass announced winners in all competitive categories at the annual Sparky Awards. The documentary short grand jury prize went to To Calm the Pig Inside by Joanna Vasquez Arong, and the 2020 narrative shorts jury prize was presented to Moving by Adinah Dancyger.

The $25,000 AGBO Fellowship, presented by Joe and Anthony Russo and colleagues at their AGBO production company, was awarded to Carlota Pereda, director of Piggy.

“We congratulate the winners of Slamdance 2020 and we celebrate all of our new filmmakers who have shown us that the art of filmmaking is brilliantly alive,” said Slamdance co-founder Peter Baxter.

“This next generation collectively brings us art formed in risk taking, bravery and the unexpected. It’s not just their characters who are on an adventure. It’s the filmmakers as well and Slamdance will continue to be their companion.”

Slamdance’s 2020 feature competition line-up encompassed 16 world, North American, and US premieres. In total, 11 narrative and nine documentary features were showcased in competition, and all competition films were feature-length directorial debuts under $1m, and without US distribution.