'All This Victory' takes 2018 Karlovy Vary works in progress prize 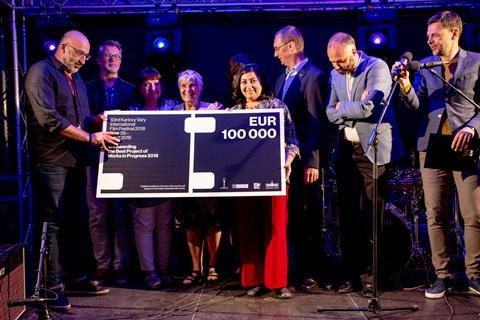 Ahmad Ghossein accepts the works in progress award for ‘All This Victory’.

The works in progress award, open to films from Central and Eastern Europe, the Balkans, the former Soviet Union, and the Middle East, was won the Lebanon/France/Germany co-production All This Victory directed by Ahmad Ghossein. The film was one of 11 other projects pitched during the event.

“The project is based on a true story,” explained Ghossein speaking to Screen after the prize was announced. “It takes place during the 2006 war in Lebanon and is about a group of civilians who are trapped in a house on the first floor when Israeli soldiers enter on the second floor. It’s set in one location over three days.”

This year was the first time that Karlovy Vary’s works in progress has included films from the Middle East.

Ghossein added: “To win is great as I’ll finally be able to deliver the project as we need to work on post-production with things such as sound and the opportunity to work with companies here is a great achievement.”

The jury, made up of the European Film Market director Matthijs Wouter Knol, Bulgarian producer and director Rossitsa Valkanova and Rickard Olsson from Picture Tree International in Sweden, said: “We expect this film to impress and resonate with audiences, as it manages to rise above the particularities of a military conflict, implying questions of existential importance with a bitter smile.”

The docs in progress award, presented at Karlovy Vary for the first time, went to The Projectionist, a Ukraine/Germany/Poland project directed by Yuriy Shylov, with a special mention going to the Polish project Little Poland. There were 10 projects in the selection overall.

“It’s a story about an elderly projectionist who accidentally burns down his cinema and is forced into retirement,” said producer Olha Beskhmelnytsina. “We’ve been working on this project for years and we will be releasing the film in the Autumn. We didn’t expect to win!”

Tanja Georgieva, the CEO and producer at Elemag Pictures, Noemi Schory, a producer and director and founder of the Documentary Filmmakers Forum, Israel and Shane Smith, director of programming at HotDocs, Canada were on the jury that gave the film a cash prize of €5000 ($5815), donated by KVIFF.

The Eurimages lab project award, awarded to films that push the boundaries of traditional filmmaking, went to Adele Tulli’s Normal (Italy/Sweden), which focuses on gender norms in contemporary Italy. The prize has a value of €50,000 ($58,204).

“This was the most convincing pitch and the images correspond perfectly with the introduction,” said the jury, made up of David Kořínek, the director, co-founder of Supermedia Studio at the Czech Academy of Arts, Architecture and Design, Dorien van de Pas from the Netherlands Film Fund and Christoph Terhechte the artistic director of Marrakesh International Film Festival.