Disney’s latest superhero outing posts biggest April opening, biggest Saturday ever for the distributor and the eighth-biggest opening of all time. 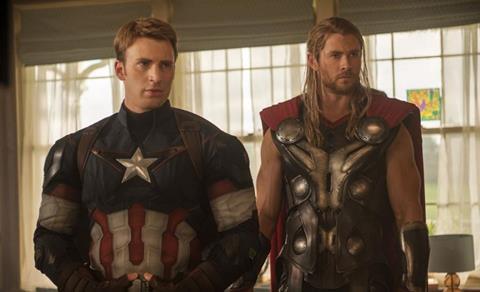 After recording the second highest opening Thursday of all time, it was only a question of how big Avengers: Age Of Ultron would open at the top of the UK box office.

Overall, Avengers: Age Of Ultron’s chart-topping debut ranks as the eighth biggest opening of all time in the UK, and lays down the gauntlet to James Bond’s Spectre and Star Wars: The Force Awakens for their bows later this year.

Among its many records, the film posted the biggest April opening of all time, while Saturday [April 25] saw the film deliver the biggest single day for Disney of all time with $9.4m (£6.2m), also the biggest day for a superhero film ever. It also achieved the biggest IMAX weekend result ever with $2.2m (£1.45m) across the four days.

In terms of Marvel Studios outings, it replaces the $23.9m (£15.78m) debut of its predecessor, Marvel’s Avengers Assemble, as the biggest opening, with that film’s final result of $78.6m (£51.9m) firmly in its sights as Avengers: Age of Ultron attempts to become Marvel’s best-ever UK performer.

Fast & Furious 7 may have been prevented from a fourth straight week as the UK’s number one, but it can take comfort in that it will shortly become the year’s highest grossing film, if only for a brief time.

Fast & Furious 7 will soon overtake Fifty Shades, and then it’s just a question of how long it takes Avengers: Age Of Ultron to overtake it in turn.

It will shortly surpass Dreams of a Life’s $271,000 (£179,125) result as Morley’s best UK performer, although it’s worth noting that Dreams only received an 18-site release at its widest.

This weekend sees saturation releases for Fox’s Far From The Madding Crowd, eOne’s Two By Two: Ooops… The Ark has Gone and Universal’s Unfriended.

Kaleidoscope/Spectrum’s I Am Big Bird, Vertigo Films’ Monsters: Dark Continent, Koch Media’s Samba and Shear Entertainment’s We Are Monster are among the films receiving limited releases.