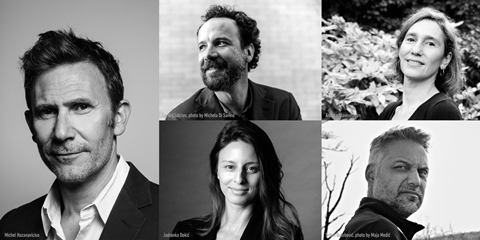 The Sarajevo Film Festival has announced the jury for its main competition who are all set to the attend the physical event, which plans to run from August 14 to 21 with Covid-19 safeguards in place.

As previously announced, the feature competition jury will be presided over by Michel Hazanavicius, the French writer-director behind Oscar-winner The Artist, whose latest feature is family adventure The Lost Prince.

He will be joined by Berlinale artistic director Carlo Chatrian; Croatian actress Jadranka Đokić; Serbian director Srdan Golubović; and Morelia film festival head of industry Andrea Stavenhagen. Together, they will decide and announce the winners of the Heart of Sarajevo awards at a ceremony on August 20 in the city’s National Theatre.

Golubović is the Serbian director behind The Trap, which made the final shortlist for the foreign language film Oscar in 2007. His 2013 film Circles was also selected as Serbia’s Oscar entry that year (but not shortlisted) while his latest feature, Father, won the Panorama audience award and Ecumenical jury prize at this year’s Berlinale.

Đokić has starred in features including Zrinko Ogresta’s Behind The Glass, which won her the best actress prize at Pula Film Festival in 2009. More recently, she starred in Pjer Žalica’s comedy drama Focus, Grandma, which is in post-production and has been backed by Sarajevo Film Festival.

Sarajevo is pressing ahead as a physical event this year, despite a second spike of coronavirus cases in Bosnia and the recent cancellation of the Motovun and Pula film festivals in neighbouring Croatia.

SFF organisers have said they are working with Bosnia and Herzegovina healthcare institutions to define safety protocols for all festival locations and guests and that this year’s event will mix physical and online elements, while anticipating smaller groups and fewer guests.

The 26th edition of the Sarajevo Film Festival will announce its line-up in the coming weeks.