Other winners include Mikhail Red’s Eerie and Bu Wei’s Man Of Sin. 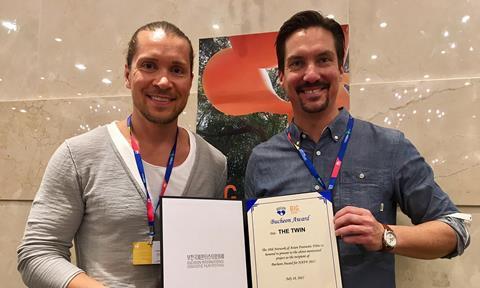 Selected to the Nordic Genre Invasion showcase, The Twin follows a family that moves to the Japanese countryside in search of redemption after one of their twins is killed in a car accident.

Speaking about his project, Mustonen (pictured, top left with producer Aleksi Hyvarinen) said, “We came here and to be honest, I was rather scared to be pitching it to anyone for the first time. We learned a lot every time we pitched it. And we just came from the screening of our previous film Lake Bodom. It’s been an amazing experience.”

Director Bu Wei’s Chinese project Man Of Sin, a thriller built around an organ trafficking revenge story, picked up the $10,000 Signal Pictures Award as well as the MONEFF Award for editing support.

Wei got a laugh from the audience as he expressed his delight upon accepting the MONEFF Award: “I’m from China, I’m a Communist. I’m surprised you have me here and are giving me this award after all that has happened. Thank you. I’ve always had this struggle - whether I’m good enough. I’m always trying, always writing. Thank you for this award. It’s no longer important because I’ve shared this experience with you and […] was inspired.”

The controversial freeze on mainland China-South Korea relations in the entertainment industry after the THAAD missile defense system was deployed in Korea seems to be showing small signs of thawing and festival attendees noted the participation of Wang Fenglin, vice president and secretary general of the China Film Producers’ Association at NAFF.

He also noted that in total, 57 companies had over 400 meetings with the 24 selected projects this year.