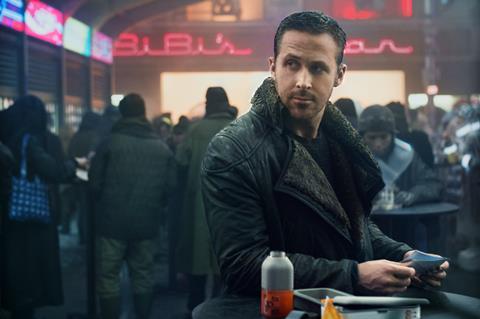 Martin Campbell’s The Foreigner ended the weekend on $23.1m. The film starring Jackie Chan, Pierce Brosnan, Rufus Jones, and Katie Leung will be released in the US on October 13. The film earned $500,000 at the IMAX box office, brining its nine-day IMAX total to $4m.

UPDATED: Blade Runner 2049 debuted on $49.2m in just 61% of its international footprint at the weekend and captured the number one spot in 45 of its 63 markets.

Sony executives noted that the sci-fi sequel’s $49.2m debut put it in the same class of films that had earned good reviews and strong box office returns such as Gravity, Mad Max: Fury Road and The Martian.

The Mountain Between Us launched in 11 markets over the weekend, collecting $3.7m. The film starring Idris Elba and Kate Winslet grossed $1.1m in Mexico; $1m in the UK; and $581,000 in Russia. The film opens in five additional markets this week, including Belgium and Australia. Judwaa 2, from Fox International Productions and FoxStar, earned $3.2m from two markets. India generated $3.1m and repeats at number one in the market for the second weekend in a row, taking the international sum to $22.3m.

Captain Underpants: The First Epic Movie added $2.3m from seven markets for $40.1m. Australia generated $1.1m, down only 8% from last week, while France produced $712,000. The animation opens in Brazil, Germany, and Holland this week. War For The Planet Of The Apes added $1.1m, lifting the international total to $338.3m as it prepares to open in Japan this week.

UPDATED: Warner Bros horror smash It  has become the highest grossing horror film of all time internationally. Andy Muschietti’s film grossed another $20.1m on 7,020 screens in 64 international markets over the weekend, lifting the running international total to $299.1m, and bringing the worldwide tally to $604.4m. In its second weekend, Germany returned a number one ranking and $6.5m on 710 screens as the film dropped 39% from its record-breaking debut. The film stands at $24.5m there, and will receive its third Bogey Award for pulling in more than two million admissions in just 11 days.

UPDATED: Victoria And Abdul opened in four more territories this weekend for a total of 32 territories in release, grossing $3.1m for a $25.1m international running total. The historical drama starring Judi Dench and Ali Fazal debuted in France at number eight on $403,000.  The Philippines generated $47,000, while Trinidad took in $22,000. The UK added $607,000 during its fourth weekend for a total of $11.1m. Germany produced $522,000 in week four for $1.8m. The film opens in India, Pakistan and Thailand this week.

Tom Cruise action adventure American Made grossed $1.8m in 58 territories to raise the international total to $68.2m. Combined with North America’s total of $30.8m, the worldwide total is $99m. France generated $437,000 for a total of $4.6m. Doug Liman’s film will debut in Russia and Ukraine this week.

Family comedy Woody Woodpecker, which mixes animation and live-action, debuted in Brazil on $1.5m, where it ranks behind Blade Runner 2049. The film will release theatrically in the rest of Latin America starting in January 2018.

Amblin Entertainment and Walden Media’s A Dog’s Purpose is holding strong in Japan’s second weekend at number two on $981,000 for a total of $4m. The international total including non-Universal box office is $136.7m. When combined with North America’s total of $64.3m, the worldwide total is $201m.

UPDATED: Cars 3 added a further $3.3m from 10 active territories for $221.7. Disney and Pixar’s animation dropped just 12% from last weekend in Austria on $1m, which is good enough for second place behind It and ahead of new opener Blade Runner 2049. The film dipped 25% from last weekend in Germany on $6.5m, where it ranks number three behind It and Blade Runner 2049. China is the top grossing market on $20.7m, followed closely by France on $19.5m, and Japan on $16m.

My Little Pony: The Movie rode to $3.8m from 49 markets for its initial international rollout. Germany is the top grossing market on $676,000, followed by Mexico on $533,000, and Poland on $411,000. The animation debuts in Russia this week, followed by France and the UK in the following weeks.