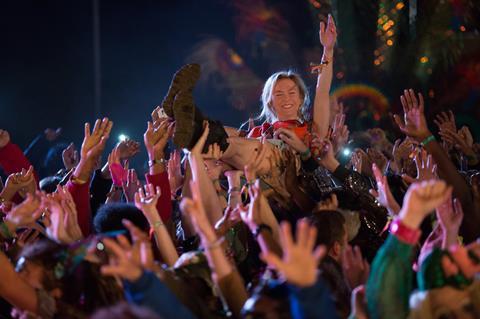 The Working Title production, presented by Universal, Miramax and Studiocanal, opened in eight new territories with Italy providing the best debut at $1.9m, while the UK provided a terrific $8.4m second weekend for $27.6m after only ten days in play.

Australia added $2.1m for an 11-day tally of $7.8m and the threequel retained the top spot in the Netherlands with $1.1m and a local tally of $3.6m. It opens in Brazil, South Korea and Malaysia next weekend.

Landing in Poland with a chart-topping $1.7m, The Secret Life Of Pets hopped to an additional $9m from its 57 territories for $457.4m overseas and $821.7m globally.

Universal Pictures and Illumination Entertainment’s hit animation reclaimed top spot in Australia with a $2.6m third weekend for $13.5m, and has two more territories to release: South Africa next weekend and Italy on Oct 6.

Kubo And The Two Strings sailed to $2.1m from its 27 territories for $12.9m, following a $924k debut in France which marks the second biggest for Laika in the territory. It opens in Belgium next weekend.

The Purge: Election Year and Jason Bourne stand at $36.2m and $236.8m, respectively, ahead of their final international openings over the next fortnight.

The western remake, which MGM and Columbia Pictures co-financed, enjoyed its best debut in the UK with $2.6m to chart second, followed by a chart-topping $1.8m bow in Russia and a number two opening of $1.4m in Germany.

In its second weekend in South Korea, it added $1.1m for $6.7m to date, while it also posted $1.1m openings in Brazil and Spain. The Magnificent Seven grossed $4.3m from 606 IMAX sites worldwide, with $1.4m coming from 234 sites overseas.

Antoine Fuqua’s remake opens in France and Australia next weekend.

Sausage Party has now grossed $26.5m ahead of releases in Brazil, Germany, Mexico and Spain in the first week of October.

Next weekend, it opens in Spain, followed by the UK and France on Oct 14.

Suicide Squad and War Dogs stand at $413.7m and $34.4m, respectively. The latter arrives in Germany next weekend.

Currently playing in six territories, A Chinese Odyssey: Part Three grossed an estimated $6m in its second weekend of release for $48.4m to date, according to ComScore.

David Lam’s action thriller sequel S Storm shot to an extra $5.3m from its six territories for $28.25m, while romantic drama Soulmate enjoyed a $5.2m second weekend for $20m so far in China.

Cock And Bull stands at $17.4m following a $3.15m second weekend from its three territories, as Chibi Maruko-chan: The Boy From Italy posted a Chinese bow of $2.7m.

Finding Dory is now the third highest grossing film of 2016 to date worldwide with a global haul of $969.8m, which also makes it the sixth biggest animation of all time.

Overseas, Pixar’s latest swum to $5.3m from its 14 territories for $485.6m. This weekend saw it retain the top spot in Italy for a local tally of $11.7m, ahead of its final international releases in Germany, Austria and Switzerland next weekend.

With no new openings, Pete’s Dragon flew to an extra $2.9m from its 30 territories for $47.5m overseas. It lands in Brazil, South Korea and Norway next weekend.

Ahead of its opening in Mexico next weekend, Blair Witch uncovered $4.7m from its 48 markets for an early $11.5m. Brazil is currently the leading market with $2.4m.

Opening in four new markets, raunchy comedy Bad Moms partied to an estimated $4.6m from its 58 markets for $53.6m to date.

The Age Of Shadows retained top spot in South Korea with an estimated $4m third weekend for $51.1m so far.

Ahead of its release in Italy next weekend, Ben-Hur travelled to another $3.3m from its 40 markets for $60.2m to date.

Paramount-MGM’s remake posted a $1.6m second weekend in South Korea for $8.8m and added $467k in France for $3m after three weeks in play. It opens in China on Oct 10.

Xavier Dolan’s It’s Only The End Of The World opened with an estimated $2.2m in France, according to ComScore.

The film was picked as Canada’s Oscar submission last week.

Currently playing in 12 markets, Ice Age: Collision Course is now up to $340.9m.

Morgan stands at $4.1m ahead of its release in France next weekend, while Mike And Dave Need Wedding Dates and Independence Day: Resurgence have grossed $30.5m and $284.9m, respectively.