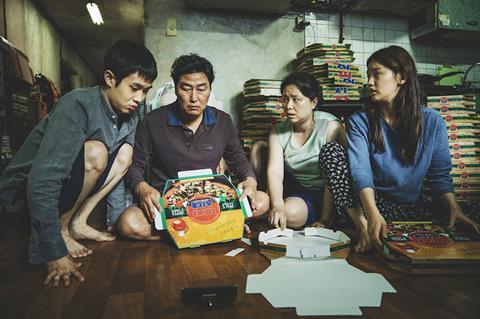 Parasite follows a struggling family who invade the lives of the wealthy Park family and get in over their heads when they become entangled in an unexpected incident.

Elsewhere, Atlantics director Mati Diop picked up the Grand Prix, making her the first black woman to win a Cannes prize (following her distinction of already being the first black woman to compete at Cannes). In total, three of the four films directed by women in Competition this year won prizes (Céline Sciamma took Best Screenplay, while Emily Beecham won Best Actress for her role in Jessica Hausner’s Little Joe), however none became the first solo female filmmaker to take home the Palme d’Or.

The Best Screenplay award went to Sciamma for Portrait Of A Lady On Fire.

Cannes regulars Jean-Pierre and Luc Dardenne picked up the Best Director(s) prize for their Young Ahmed.

Best Actress went to Beecham for her role in Little Joe, while Antonio Banderas took Best Actor for Pedro Almodovar’s Pain And Glory.

César Díaz’s Our Mothers picked up the Camera d’Or while Elia Suleiman’s It Must Be Heaven won a Special Mention from the jury.

The Short Film Palme d’Or went to The Distance Between Us And The Sky by Vasilis Kekatos, with a special mention going to Monstruo Dios by Agustina San.