Despite lingering concerns about the potentially negative impact that Brexit could have on the UK’s film industry, the mood at a UK Film Centre panel in Cannes yesterday (May 12) was notably buoyant. 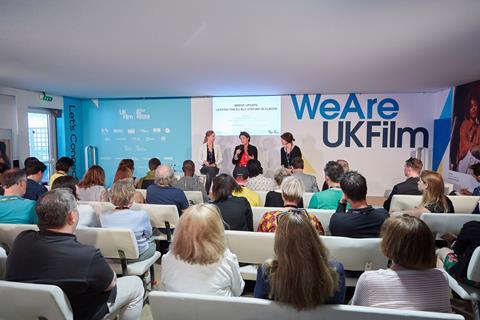 At the event, the BFI’s director of external affairs Harriet Finney and head of international Isabel Davis, who were joined on stage by legal expert Sunniva Hansson from firm Wiggin, outlined the key developments in the process that have taken place over the last six months.

Those include the introduction of the UK government’s £150m creative industries ‘sector deal’, which Finney said could “turbo charge growth [in the film industry” and has “firmly planted ourselves [the creative industries] as one of the core sectors in the UK”.

A further note of positivity is that the UK is looking to remain a part of the Creative Europe programme, which Finney described as a “huge comfort” to the industry. The government has made a firm commitment to the programme until 2020 and Finney noted that a longer commitment post-2020 is “on the table” with “both sides open to talking” about continued UK involvement.

Hansson noted that “there is no obstacle to the UK remaining a part of Creative Europe after Brexit, from a legal perspective”.

The panel also reiterated that the UK could re-join funding European programme Eurimages, with Finney confirming that the long-rumoured option is “being looked at very firmly”. However, she also noted that the cost of joining Eurimages is an issue and that the BFI is not able to fund that from its existing resources.

The primary question mark and cause for concern remains the freedom of movement of workers between the UK and the EU post-Brexit.

The UK’s Creative Industries Federation has been lobbying the government hard for an amendment to the Brexit bill – amendment 146 – that would allow for creative workers to continue to be able to freely work across EU borders on short notice.

“The issue around people remains concerning,” commented Finney. “Freedom of movement will continue in the transition period. But [after 2020] we’ll not be able to influence any legislation that’s being decided in the EU.”

“Some of these things will be teased out in the next six months,” Finney continued, asserting that the debate was “still open” and that “the government is very keen to make a lot of progress by October”.

While the potential Brexit impact has at times carried a largely negative spin when discussed at film industry events, and serious questions remain about the potential impact it will have on the business, the audience at yesterday’s panel were largely in a positive mood.

At the conclusion of the panel, one UK producer, David Marlow, called for recognition of the BFI’s efforts to lobby government on behalf of the creative industries and to inform UK film workers about the Brexit process, a suggestion that led to a round of applause from those present.