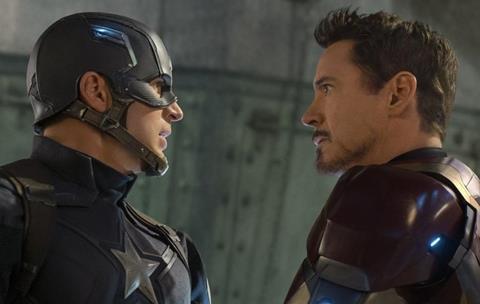 Officially, it won’t have the four-day opening record for a superhero film, but it’s made more than the $26.6m (£18.02m) that both Avengers: Age Of Ultron and Batman v Superman pulled in.

Civil War’s official $21.2m (£14.4m) debut will go down as the third-best Marvel bow in the UK, behind both Avengers outings. Based solely on Fri-Sun takings though, it’s ahead of Avengers Assemble and on par with Age Of Ultron.

Earlier this year, Batman v Superman achieved the biggest ever Fri-Sun tally for a superhero film at $21.6m (£14.62m), largely thanks to opening over Easter. Civil War might have narrowly missed out, but will likely overtake BvS in the long run.

Also for Disney, The Jungle Book continued its extraordinary run by dropping only 29% for a $8.4m (£5.7m) third weekend.

Disney enjoyed a 1-2-3 in the market on Saturday, Sunday and Monday.

Eye In The Sky enjoyed a sturdy hold in its third weekend with a drop of around 35%.

Opening against Civil War was always going to be tricky and so it proved for Fox’s Demolition.

Oscar winner Son Of Saul is off to a promising start at the UK box office.

Sony’s I Saw The Light receives a wide release, while Studiocanal’s Knight Of Cups, The Works’ These Final Hours and Metrodome’s Evolution are among the films receiving a limited release.