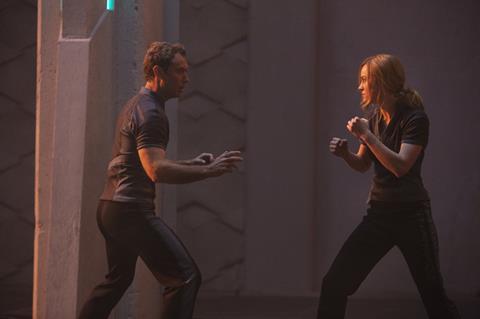 That’s the best start for a film in the Marvel cinematic universe that introduces a singular character to the franchise, topping the likes of Thor (£5.4m), Captain America (£3m), Doctor Strange (£9.3m), Deadpool (£10m three-day) and Black Panther (£10.5m three-day).

Black Panther opened on a Tuesday back in February 2018, adding previews for an overall £18m bow. That film topped out at a huge £50.6m after strong buzz propelled it to consistent grosses – that’s a high watermark for Captain Marvel to aim for.

The Captain Marvel result is a much-needed one for UK cinemas. In the year to-date, the period January-February, box office takings had been 24% down on the same period in 2018, equating to £57m. Disney’s latest arrival could plug some of that gap if it has the legs.

Wrestling comedy Fighting With My Family posted a strong hold in its second weekend, dropping 37% with £1m taking it to £3.7m to date.

Asghar Farhadi’s Spain-set thriller Everybody Knows was released in the UK this weekend after opening last year’s Cannes Film Festival. It stars Penelope Cruz and Javier Bardem in the story of a woman whose daughter is abducted. Playing in 54 locations, the film took £110,481 (plus £4,887 in previews) for an average of £2,046, the third best in the top 20 this week behind Captain Marvel and Bollywood title Badla.

Can You Ever Forgive Me? is now up to £2m from its UK run.

Sleeping Beauty, part of the Bolshoi Ballet season of event cinema screenings, had a one-day cinema release this weekend, delivering £175,491 from 152 sites, with 14 further to report. The film will have an additional 16 encores and those are likely to push it to £200,000 – that will be the second best-performing result of this Bolshoi season, behind The Nutcracker (£287,270).

Sara Colangelo’s The Kindergarten Teacher, the remake of Nadav Lapid’s original Israeli feature starring Maggie Gyllenhaal, got underway with a three-day gross of £48,023 from 76 sites. Including previews, the film has taken £61,035 to date.

Sailing documentary Maiden opened with £45,278, including previews, from 16 screens.

Streaming service and distributor MUBI released Ali Abbasi’s 2018 Cannes Un Certain Regard award-winner Border into UK cinemas this weekend. The film was given a full 16-week theatrical window, meaning it could play in Picturehouse cinemas. London’s Hackney Picturehouse was the second highest-grossing from its 49 sites as the film returned a three-day total of £41,883. With previews, its gross to date is £79,773.