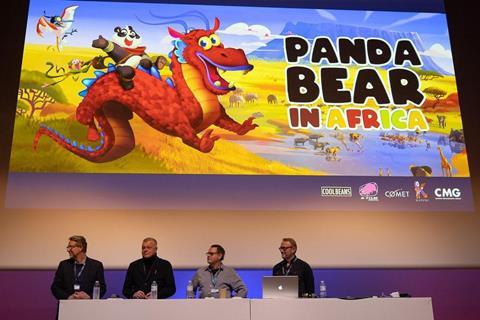 Meanwhile Wilco Wolfer’s WW Entertainment in Amsterdam has signed on to release the film in the Netherlands and Belgium.

The animated feature is in pre-production, and marks the third animation CMG is selling and serving as executive producer with producers and co-directors Claus and Kiilerich (The Little Vampire 3D, and co-producer on Ainbo – Spirit Of The Amazon).

This is also the second time Claus will co-direct with Kiilerich after The Little Vampire 3D. Panda Bear In Africa centres on Ping, a young Chinese panda who embarks on a quest to rescue his dragon friend Jielong after she is kidnapped.

CMG previously pre-sold the film to Palatin Media for Germany, Austria and Switzerland, Volga Film for Russia, Ukraine and the Baltics, Front Row Entertainment for the Middle East, Filmhouse in Israel, Kino Swiat for Poland, Films4 You in Portugal, Filmarti for Turkey and Dexin Film for former Yugoslavia.

“We couldn’t be happier to be in business with Jean Labadie and Thomas Piebarot of Le Pacte as they have shown, time and again, how good marketing and effective publicity make a huge difference in a film’s success in France,” said Claus.

“We’ve had a great relationship with Jean Labadie over the past fifteen years,” said Noeltner who licensed Labadie the international animation hit Hoodwinked back in 2004 which went on to gross more than $6m in France.

“With Le Pacte, and WW Entertainment, we know that we are in good hands”, said producer Mastrup.

Noeltner added he was looking forward to further pre-sales during the Cannes virtual market, when he planned to unveil a new easer trailer.