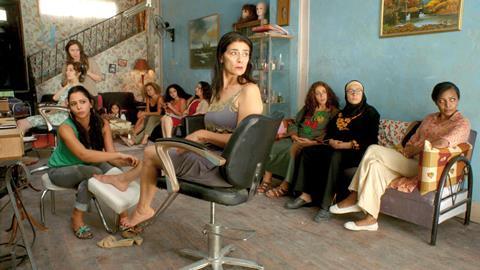 The film was co-produced by Made in Palestine Project, Les Films du Tambour, Abbout Productions and Full House.

Starring Hiam Abbass in the lead role, the story unfolds in a Gaza Strip beauty salon where female clients get stuck when gunfire breaks loose in the streets. It debuted at the Cannes 2015 Critics week.

The festival’s awards were decided by a five-member Youth jury comprised of cinema students.

Alante Kavaite won the best director trophy for The Summer Of Sangaile, a Lithuanian-French-Dutch co-production.

The film, which debuted at Sundance (Jan 22-Feb 1) where it also won the direction award in the World Cinema Dramatic competition, is about the sexual awakening of a 17 year-old Lithuanian girl.

The film, which debuted at Berlin (Feb 5-15) in the Generation Kplus section, has played in a score of festivals on the circuit including Edinburgh, Galway and Seoul.

Elsewhere, a special mention went to actress Veronica Linas for La Mujer De Los Perros (The Lady With The Dogs), which was co-directed by Linas and Laura Citarella, and the audience award went to the Labyrinth Of Lies (Im Labyrinth Des Schweigens), directed by Giulio Ricciarelli

In the music and films competition Jaco, directed by Stephen Kijak and Paul Marchand, won the Golden Athena for best film.

The film tells the story of Jaco Pastorius, a self-taught, larger-than-life musician. It was produced by Metallica’s Robert Trujillo and Passion Pictures (Searching For Sugar Man).

Further awards were handed over to features and short films in the festival’s Greek section, which this year showed 102 films.

Yannis Veslemes was named best first time director for Norvigia, which follows a modern day photophobic vampire who arrives in Athens from the provinces and gets devoured by the dark underbelly of the capital city.

In 2015, AIFF showed a total 239 films including retrospectives and homages to Eytan Fox, Nicolas Roeg, Shirley Clark and Sean Baker.

Fox was present at the ceremony to introduce his retrospective accompanied by the likes of Gaspar Noe and Laurent Cantet, who presented their respective latest films Love and Return To Ithaca.