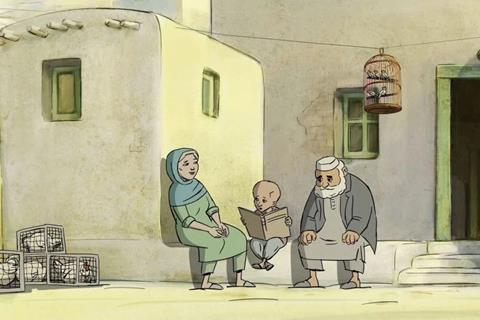 Diaphana Distribution has acquired French rights to Czech director Michaela Pavlátová’s My Sunny Maad, which is due to world premiere in the Annecy International Film Festival’s main feature competition this June.

The respected French distributor has a strong track record in feature animations, having previously released Phantom Boy, Long Way North and Mary And The Witch’s Flower. It plans to release the film in France in the first quarter of 2022.

My Sunny Maad revolves around a Czech woman who falls in love with an Afghan man and then follows him to post-Taliban Afghanistan, where she has no idea of the life that awaits her or the family she is about to join.

It was adapted by Ivan Arsenjev and Yaël Levy from the novel Frista by Czech journalist and humanitarian worker Petra Petra Procházková.

It is Pavlátová’s second solo feature and first animated feature. She was previously Oscar-nominated for her 1993 animation short Words, Words, Words and won Annecy’s Cristel award for best short film for Tram in 2012.

“We fell in love with this animation. Its originality and humanity captured our hearts: it’s a hymn to tolerance,” said Diaphana Distribution CEO Michel Saint-Jean and head of distribution Didier Lacourt.

Paris-based Totem Films is handling international sales on the film.

“Totem has been working alongside the producers for a long time on the film,” said Totem co-head Laure Parleani. “It’s a joy to accompany Michaela’s work, which is so rich, multi-layered and poetic.”

My Sunny Maad is one of ten animated features competing for Annecy’s prestigious Cristel award this year at its hybrid edition running June 14-19.