Disney’s latest Marvel offering posts fifth-biggest opening for the brand in the UK with six-day bow of $11.24m (£9.23m). 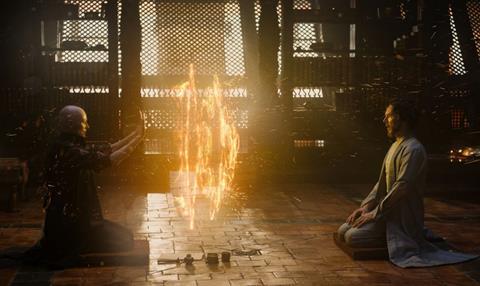 It might be Halloween, but Doctor Strange proved a treat for UK audiences as it dethroned Trolls at the top of the box office.

In terms of Marvel outings in the UK, it ranks as the fifth biggest overall debut ahead of Thor: The Dark World’s $10.56m (£8.67m) from 510 sites. It’s also the biggest-ever opening for an original Marvel offering (not a sequel).

Based solely on Fri-Sun takings, Doctor Strange ranks as seventh biggest weekend take, but remains the biggest gross for an original offering, ahead of Guardians Of The Galaxy’s $6.04m (£4.96m).

Fox’s animation enjoyed a bumper half term as it added more than $6.46m (£5.3m) across Mon-Thurs, leading the market on every day but Tuesday. It is now up to an excellent $17m (£14m) and should continue to be the leading family choice.

That’s a boost of 17% (excluding previews) likely thanks to an expansion to 214 sites, and Ken Loach’s critically acclaimed drama has already grossed $1.61m (£1.33m) in the UK.

Bridget Jones’s Baby will become the biggest film of 2016 by the end of today (October 31).

From its 34 sites through Studiocanal, South Korean box office smash Train To Busan travelled to a decent $47,000 (£38,349) UK opening, including previews.

My Scientology Movie has hit the £1m mark at the UK box office.

Dogwoof’s Richard Linklater: Dream Is Destiny, Studiocanal’s The White Knights and Peccadillo Pictures’ Girls Lost are among the films receiving a limited release.