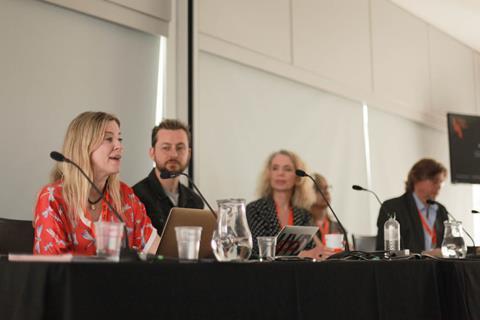 The ‘Influencing Brexit’ discussion at Doc/Fest.

UK members of the European Documentary Network (EDN) are lobbying for the UK to remain part of the Creative Europe programme after Brexit.

The campaign was launched at this year’s Sheffield Doc/Fest on June 9.

An online petition has been set up on the EDN website, requesting signatures for a declaration of support for the UK’s continued membership.

The declaration states, ‘Documentaries supported by the EU’s Creative Europe programme are a vital part of a free and open society and our shared cultural exchange.

The documentary industry as a whole benefits from the access to international cooperation networks which the programme provides.’

At a lively discussion session called ‘Influencing Brexit: Have Your Say’, industry representatives including director of the EDN Paul Pauwels and director of the Creative Europe Desk UK, Agnieska Moody, described why the UK’s participation in the programme is so vital for UK documentary projects.

The debate, which resulted in a mood of mobilisation and engagement, was chaired by Allison Rooper, managing director of In Focus Productions, with head of marketplace/talent at Doc/Fest Patrick Hurley and producer at Met Film Production Al Morrow also participating.

”The EDN fully supports the initiative taken by British members to advocate the continued participation of the UK in the Creative Europe programme,” said Pauwels. ”We consider the UK as the cradle of documentaries and cannot imagine developing European documentaries without our British colleagues.”

On Doc/Fest’s involvement, Liz McIntyre, CEO and festival director, said, “With less than one year before Britain leaves the EU, it is important Doc/Fest provides a forum for this conversation now. The British members of the EDN traditionally come together at Doc/Fest, where the festival has provided an essential forum for the discussion about Creative Europe.”

“The EDN has about 100 members here in the UK,” said Rooper. ”We brought ourselves together [with Doc/Fest] to try and make something happen at Sheffield because we felt the time was very pressing now. Documentaries are imperilled without the kind of public money that comes from Europe. The kind of films that you see here at Sheffield – they’re the ones we’re concerned about because they’re part of the fabric of society.”

Among the further organisations supporting the campaign is the Creative Industries Federation. “On Brexit, we have been engaging with all levels of UK government to ensure the best possible outcome for the creative industries,” the organisation said. “This includes ensuring ease of movement for EU and UK talent, frictionless access to Europe for UK creative goods and services, and continued participation in EU funding programmes such as Creative Europe. We encourage you to sign up to the EDN campaign and to join the Federation as members to help us ensure the documentary sector is at the heart of the ongoing negotiations between the UK and Brussels.”