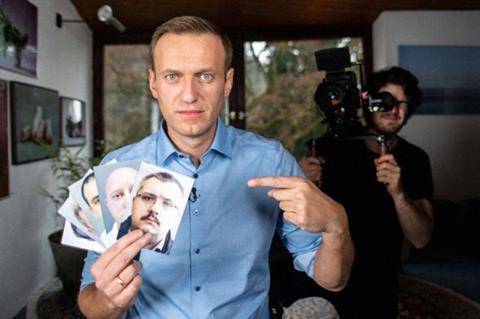 Following its international premiere at CPH:DOX last month, the festival will release the film in Denmark on April 12, replicating the same one-day nationwide screening event taking place in the UK through Dogwoof.

Further deals for theatrical releases later in April have been signed for Italy (I Wonder Pictures) and Switzerland (DCM) followed by Germany (DCM) in May and Australia and New Zealand (Madman) in the summer.

Navalny is an investigation into the assassination attempt against Russian opposition leader Alexei Navalny – a fierce critic of the Vladimir Putin regime. Navalny has been imprisoned in Russia since January 2021, shortly after completing filming; last month he was sentenced to a further nine years in prison after being found guilty by a Russian court of embezzlement and contempt of court.

The film debuted in the US Documentary competition at Sundance this year, where it won the audience award (previously won by Summer Of Soul, Crip Camp and The Invisible War) and the festival favourite prize.

Last month Warner Bros set a deal with Fathom events for a North America theatrical release in over 700 cinemas on April 11 and 12.

Roher attended CPH:DOX for the film’s international debut, taking part in ‘A Morning With’ conversation session, where topics included ethics in documentary filmmaking. The film proved one of the most popular titles during the event, with initial screenings selling out and the festival adding multiple additional screenings, eventually playing the film 13 times.