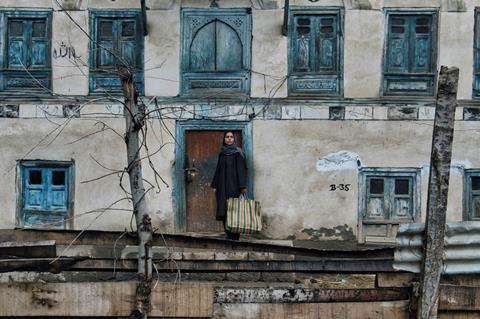 Moroccan director Hicham Lasri, Syrian Venice Lion of the Future winner Soudade Kaadan and Brazil’s Karim Aïnouz are among the latest round of new grantees of the Doha Film Institute (DFI).

The Qatari institute has announced a record 42 projects for its autumn 2019 selection, 35 of which have strong Middle East and North Africa connections.

The fantasy drama revolves around a Moroccan man who drowns crossing the Mediterranean on an illegal passage to Europe and then reappears a month later, inhabited by the souls of seven other people who died with him.

The production is lead produced by Lamia Chraibi at La Prod with the support of Egypt’s Film Clinic, Lebanon’s Abbout Productions and Tunisia’s Cinetelefilms.

It is a first foray into the TV series format for Lasri whose other credits include The End, The Sea Is Behind and Starve Your Dog.

Soudade Kaadan has won funding for her next fiction feature Nezouh about a young Syrian girl whose life is opened up to new possibilities after a missile destroys the roof of her house.

Kaadan won Venice’s Lion of the Future award in 2018 for her feature The Day I Lost My Shadow, while her short film Aziza was feted with the grand jury prize at Sundance in 2019.

Indian actor and director Aamir Bashir’s Kashmir-set feature The Winter Within has also won funding. Inspired loosely by the Greek mythological figure of Penelope, it revolves around a woman waiting for her husband to return while she is courted by another man.

Emerging filmmakers receiving support include French-Moroccan director Yassine Qnia, for his second feature Mehdi about a man who invites a woman he is trying to impress back to his mother’s place. Sales on Qnia’s debut feature A Brighter Tomorrow have recently been launched by Wild Bunch.

Other rising directors include Lina Soualem with feature-documentary Their Algeria, which explores themes of exile and separation through the tale of her Algerian immigrant grandparents who divorced after 60 years of marriage but still live close to one another in the same housing estate in France. The project won the Cannes Market’s inaugural $11,000 (€10,000) Docs-in-Progress Award last May.

Other feature documentaries in the selection include Aïnouz’s new work Nardjes A., Algiers, March 2019, following a young political activist involved in Algeria’s ongoing pro-democracy protests. The production was presented at the Final Cut in Venice post-production workshop last September.

Aside from The Winter Within, other non-MENA projects in the selection include Ukrainian director Alina Gorlova’s feature documentary Between Two Wars about an extended Kurdish family from Syria which is now spread across the world due to the conflict back home, and Mexican director Tatiana Huezo’s drama Noche De Fuego about life in a war-torn town seen through the eyes of three young girls.

The grantees also featured seven projects by Qatari-based filmmakers. These included Dawood Al-Anwari and Ali Al Ansari’s fiction feature 81’, based on the true story of a Qatari youth soccer team that competed at the FIFA Youth World Championships in Australia, and Hend Fakhroo’s Behind Closed Doors, revolving around a six-year-old girl whose life is turned upsidedown by the disappearance and then reappearance of her mother.

“Covering all genres and experimenting with narrative styles, the 2019 Fall Grants recipients are pushing the boundaries of world cinema and adding to its diversity,” said DFI CEO Fatma Hassan Alremaihi. “Each project – from Mexico to India and the Dominican Republic to Romania, tells an important story that is specific to its local context but also universal.”

Hassan Alremaihi emphasised that 20 of the projects are directed by women.

“Many of the stories originate from women filmmakers who represent a powerful creative force in the Arab world and are a testament to the ever-growing talent pool that exists in our region,” she said.