Don’t try and beat Disney at its own game, indie filmmakers hear at Rotterdam’s Reality Check 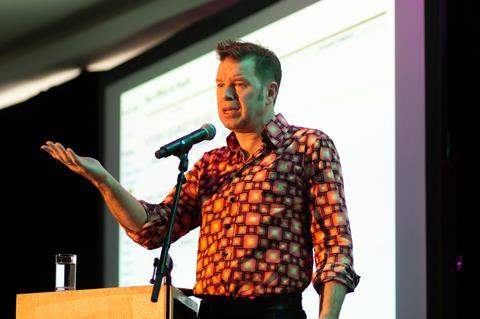 Independent filmmakers can find success at the global box office by not trying to beat the US studios at their own game, according to Dan Hassler-Forest, the Dutch-US author, cultural critic and film professor.

He opened the International Film Festival Rotterdam (IFFR)’s annual Reality Check conference with a keynote speech called ‘Originality in the face of monoculture’ on Sunday January 26.

He cited the success of Lulu Wang’s The Farewell as an inspiration.

“The film business was never Utopian,” he told attendees in the jazz-themed conference room in Rotterdam’s Hilton Hotel. “It was always dominated by huge, commercial concerns which made it difficult for artists to express themselves in the film medium.”

Hassler-Forest’s work as a media scholar, he said, was to chart how the landscape is changing. “And they’re not changing for the better, at least not from the perspective of film artists,” he said.

Allying himself with Martin Scorsese in his debunking attitude toward superhero films, the Hassler-Forest reminded audiences these “were sequels in name but remakes in spirit. Basically, the same movie being made over and over again.”

Such a model, he suggested, left scant room for “experimentation” or originality.

“Today, we live in brand world,” Hassler-Forest said. “We now live in an age where none of these [franchises] ever end and where things that ended before have to be brought back to continue…I won’t live long enough to see the LAST Star Wars movie and, as a Star Wars fan, that kind of pisses me off.”

Historically, Hassler-Forest pointed out, anti-trust legislation historically stopped media companies from growing too big. Now, those restrictions are no longer in place, the market is deregulated, and smaller companies are invariably swallowed up by their bigger rivals.

For the huge companies that now control the US studios, film isn’t even “a big part of the pie”, he suggested.

“[Film] helps them to do other things…Disney makes much more [money] selling licenses and running theme parks, so they need the films in order to make money from those other things.”

He likened the franchise films to “black holes that suck everything else around them into their orbit.”

Hassler-Forest went on to describe what he saw as the “fascist ideology” of The Lion King, which he used as an example of Disney’s dominance the global box office in 2019.

In order to describe this more he referred to a story he had been asked to write for the Washington Post last year in which he wrote: “By using predator-prey relationships to allegorize human power structures, [The Lion King] almost inevitably incorporates a worldview in which the rulers’ power derives from their biological superiority.”