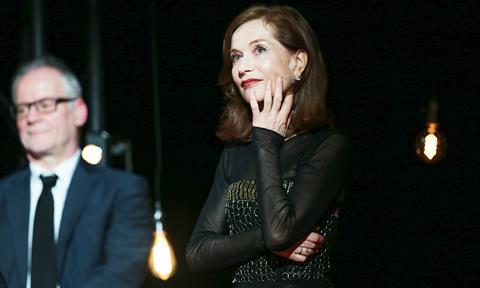 Paul Verhoeven’s French-language thriller continued its winning streak at the 22nd edition of the French Lumière awards on Monday evening.

Elle won best film and best director as well as best actress for Isabelle Huppert for her performance as a hard-nosed businesswoman who plays a psychological game of cat-and-mouse with a rapist who breaks into her home.

Monday’s prizes join a growing a list of awards for both the feature and Huppert that includes the Golden Globe for best foreign language film and best actress.

Huppert is also one of the favourites in the best actress category at the Oscars and the title recently picked up 11 nominations at the French César awards.

Some 60 journalists hailing from the international press corps in France voted in the Lumière Awards, which are regarded as the country’s equivalent of the Golden Globes.

In other awards, best actor went to Nouvelle Vague veteran Jean-Pierre Léaud for his performance as the bed-ridden Louis XIV in Spanish director Albert Serra’s portrait of the final days of the Sun King, The Death Of Louis XIV.

Writer and director Céline Sciamma – best known internationally for her own tales of youth like Girlhood and Tomboy – won best screenplay for the Swiss director Claude Barras’s My Life As A Zucchini.

Best male newcomer went to Damien Bonnard for his performance as a directionless filmmaker with creative block who falls for a shepherdess in Alain Guiraudie’s Staying Vertical.

Tunisian director Mohamed Ben Attia’s Hedi – about a listless young man who is shaken out of his lethargy when he falls for a free-spirited colleague – picked-up best non-French, Francophone film.

French-Lebanese musician and composer Ibrahim Maalouf pick-up best music for his score for Safy Nebbou’s adventure drama In The Forests Of Siberia.

By chance, the ceremony for the 2016 French Critics’ Awards also took place on Monday night at the French Cinematheque in Paris.

Most original French film was awarded to actor and director Grégoire Leprince-Ringuet’s romantic drama Fool Moon, in which he stars as a young man torn between the excitement of a new lover and the memory of the woman he left behind.